As the UK and Europe face some of the hottest temperatures on record, resulting in house fires across London and wildfires in France, Greece, Portugal and Spain, “hot” is an adjective market participants continue to use to describe inflation.

Inflation readings in the US, Europe and the UK continue to come in “hotter” than expected and the large increases in the cost of living continue to dampen consumer spirits. Over in the US, the Federal Reserve (Fed) has been explicit in its desire to bring down the highest inflation in 40+ years and its willingness to induce a recession to do so. Given the Fed’s focus on bringing down demand, jobs will have to be lost but, for the time being, the US employment numbers look to be in reasonably good health. In our view, this will allow the Fed to continue to be aggressive in its tightening measures. We see a further 0.75% rate increase at the next Federal Open Market Committee meeting.

It is only if we see a material increase in unemployment that we think the Fed will back off. However, historically, unemployment in the US has never risen more than 0.3% (see chart notes below) without a recession ensuing. In addition, the US treasury curve has inverted again recently (2Y-10Y spreads) and remains inverted at the time of writing. 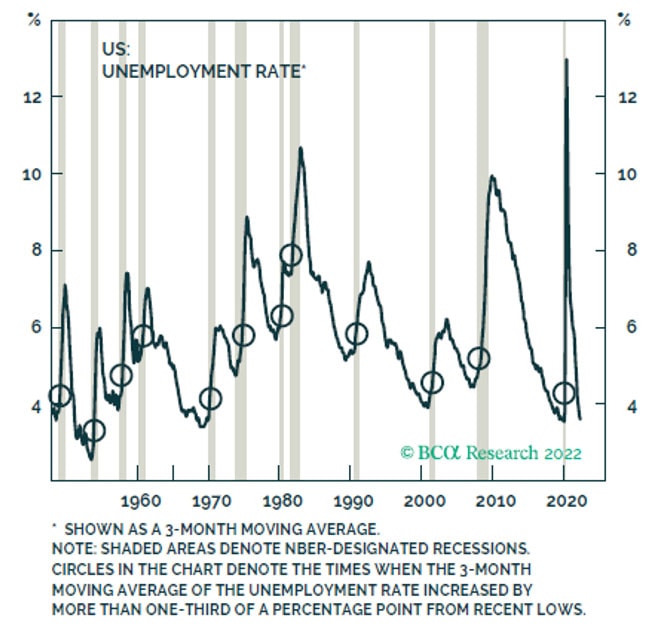 The yield curve is simply the income yield on government bonds, across all maturities, plotted on a chart. Ordinarily, the curve slopes upward when investors are optimistic about the prospects for economic growth and inflation. This is because buyers of government debt typically demand higher yields in order to lend their money over longer periods of time. After all, the longer the loan period, the greater the risk of not receiving either an income payment or the loan back in its entirety. Therefore, it is logical that investors demand a higher income yield for longer loan maturities to compensate for these risks.

However, when investors become very concerned about an imminent recession, the yield curve can become “inverted”, i.e., downward sloping. This is because investors expect interest rates to be cut into a recession and so demand less income yield for longer maturity bonds than shorter ones.

An inversion of the 2-year and 10-year bond yields (i.e., 2-year bonds yield more than 10-year) has predicted almost every recession over the past 50 years. It is a widely followed signal although the time from inversion to the onset of recession can be highly variable.

We last talked about the risk of US yield curve inversion at the end of March and it did briefly invert on several occasions. However, the most recent inversion has been deeper and more sustained compared to previous episodes this year. From this we can infer that the bond market has become increasingly worried about a policy mistake from the Fed, resulting in a US recession.

What about the UK?

Here in the UK, the Bank of England committed the extraordinary act of raising interest rates and warning of an imminent recession at the same meeting. This is counterintuitive. If one believes that economic activity is slowing, then rates would normally be cut to discourage saving and stimulate spending and economic growth.

It strikes me that the BOE is stuck between a rock and a hard place. They must be seen to be doing something about inflation but are having to do so against a backdrop of a weak economy. This has had a pronounced effect on the UK Gilt yield curve, which, as you can see from the green line below, is deeply inverted: 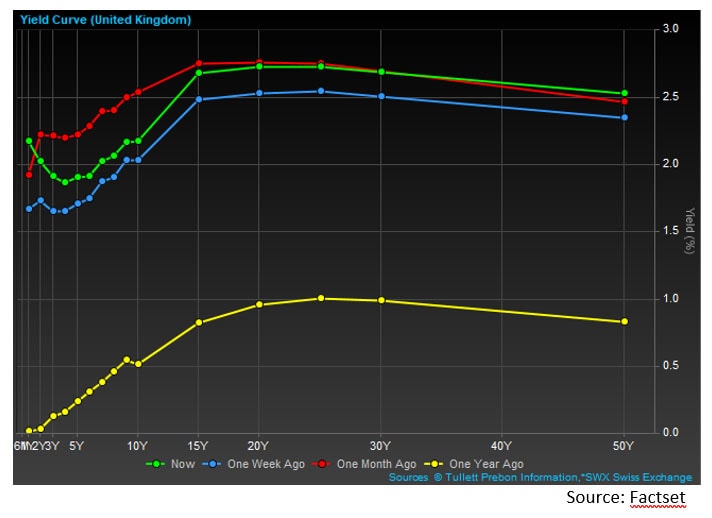 How will recession affect portfolios?

There is an argument which suggests that equity markets, particularly in the US have “priced in” a recession, so equity prices have fallen to reflect expected weaker sales and growth in a recessionary environment.  Investors cannot be sure of this, however.

One asset class which has had a lot of attention this year, for its poor returns, is bonds. Bond yields have risen substantially since their post Covid lows, as demonstrated by the below chart of the yield on a 10yr UK Gilt over the past 5 years: 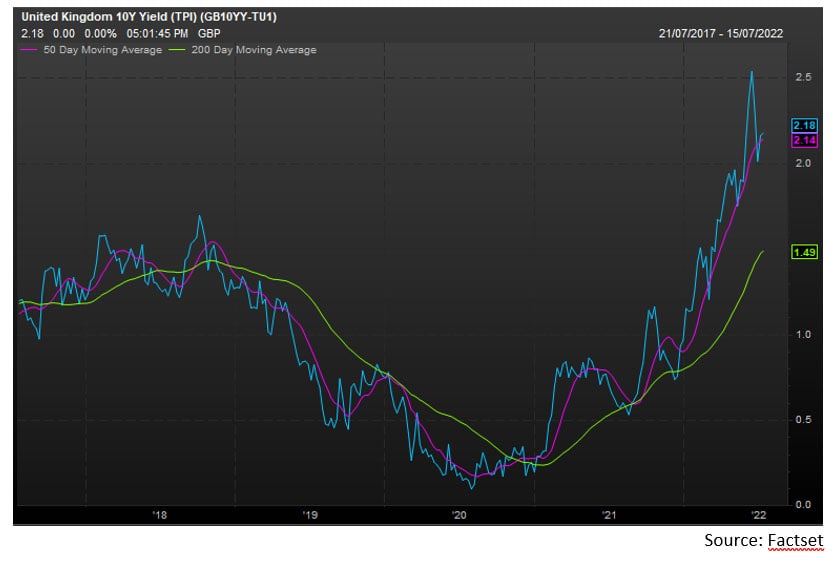 As a reminder, bond prices are inversely related to their yields so as yields rise, prices fall resulting in losses for investors.

However, should there be a recession in the UK or US we see some value in bonds now. Bonds, particularly Government bonds tend to do quite well as yields fall in anticipation of lower interest rates. They should, therefore, behave differently to equities in an economic downturn.

Diversification does work (over the long term)

It is fair to say that 2022 has been a torrid time for most investors, with almost all assets falling in unison. However, we should bear in mind that these events are extremely rare. Yes, they are deeply uncomfortable, but we do not believe them to be any kind of “new normal”.

As we move through the period of economic uncertainty, we firmly believe that the benefits of diversification across asset classes will reassert themselves.

This communication/presentation is for information purposes only. Nothing in this communication constitutes financial, professional, or investment advice or a personal recommendation. This communication should not be construed as a solicitation or an offer to buy or sell any securities or related financial instruments in any jurisdiction. No representation or warranty, either expressed or implied, is provided in relation to the accuracy, completeness or reliability of the information contained herein, nor is it intended to be a complete statement or summary of the securities, markets or developments referred to in the document. Any opinions expressed in this document are subject to change without notice and may differ or be contrary to opinions expressed by other business areas or companies within the same group as Ascot Lloyd as a result of using different assumptions and criteria.