Canary in the coal mine?

A little known, at least this side of the pond, company has been the centre of some potentially worrying news of late.

Zillow started life as an equivalent to Rightmove or Zoopla, an online real estate marketplace. As the business grew, very successfully, management had access to a massive amount of property market data, millions of dollars in capital and developed ambitions to use these tools to become a market maker in the US housing market. Essentially, they wanted to build an algorithm to buy and quickly sell houses, outsmarting both the housing markets and other specialist property companies.

The algorithm was based on the data that they had amassed through their earlier years of business, which did not and could not predict or cope with the one key variable over the past 2 years, the global pandemic. Once a darling of high growth US equity fund managers, Zillow’s stock price has fallen significantly this year as investors become more concerned about economic growth in the US and the housing market in general.

On Monday (1st November) an analyst at KeyBanc highlighted that 66% of the homes that Zillow had bought, with the aim of flipping them, were now listed below the price the company paid and at an average discount of 4.5%.

The most recent developments are that Bloomberg has reported that Zillow is selling about 7,000 homes in an attempt to claw back $2.8billion. Zillow has also announced that it has scrapped its home flipping business for good, expects to lose about $550million on homes it bought in the second half of this year, and will lay off a quarter of its staff.

Does one company matter?

In the grand scheme of things, Zillow is not a systemically important company. It is reasonably large at $22billion market cap but the knock-on effects of Zillow going under (which we don’t expect by the way) are unlikely to be significant.

This could well be a case of management trying to be too clever and, perhaps, believing their own hubris. However, the saga does send a potentially worrying signal about the state of the US housing market. As I pointed out a few weeks ago, the Global Financial Crisis started in the US housing market, so it does matter.

US house price growth has been rising fast and the latest data suggests that the pace may be starting to cool, with a 2% decline in existing home sales in August. Nonetheless, it would appear to be a sellers’ market and few economists predict house prices in the US to plummet in the near term.

Nonetheless, more expensive homes, cheap credit and a steadfast belief in the housing market all sounds rather familiar, doesn’t it? With the US Federal Reserve (Fed) looking to taper it’s Quantitative Easing (QE) programme soon and raise interest rates, perhaps next year, mortgage rates and their affordability will be something to watch over the coming years.

Interest rate rise in the UK?

Moving closer to home, the Bank of England’s Monetary Policy Committee is due to announce their base interest rate decision tomorrow (Thursday 4th November). As you will be reading this after the event, the outcome will be known to you.

Markets have been eager to price in higher inflation and the potential for an interest rate rise in the UK as UK Government bond (Gilt) yields have shot higher and the pound strengthened into the beginning of the week. The consensus view amongst economists is that the MPC will not raise rates and markets appear to have lost their conviction somewhat as well: 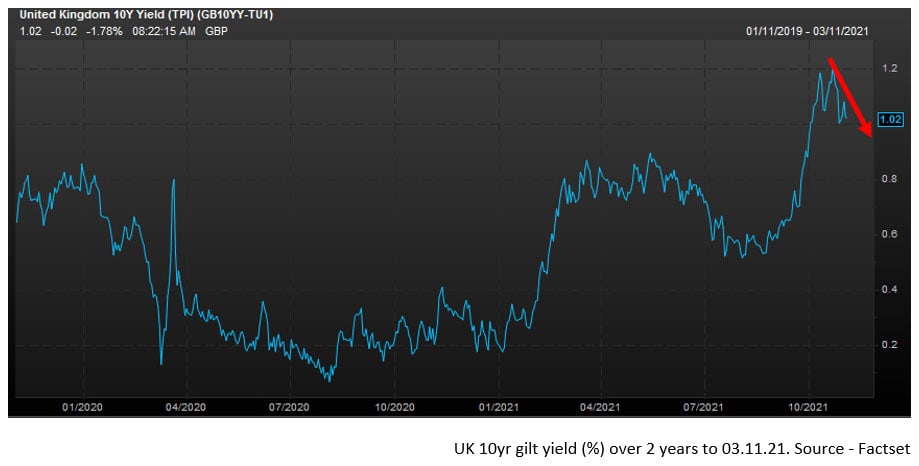 As I have discussed before, the decision is finely balanced. A token interest rate rise will do absolutely nothing to solve the labour shortages or supply chain issues that have been so well reported. However, it may help to reassure the public that the BOE is ready to step in and act should inflation broaden and turn into a “wage price spiral” whereby employees, amid a tight labour market, push for higher wages to offset higher prices.

Too much too soon?

Amongst global investors, the BOE is seen as a boom and bust central bank, despite Gordon Brown’s famous declaration that the days of boom and bust were over and is somewhat less credible than the Fed or European Central Bank.

Over the past 4 – 6 weeks we have seen a substantial flattening of the gilt yield curve, which is seen as a proxy for bond investors’ view of the future state of the economy.

As investors aggressively bring forward their expectations for interest rates rises, shorter dated bond yields have risen. However, mid and longer dated bond yield have fallen as the economy is expected to cool after the breakneck rate of growth experienced emerging from lockdown. 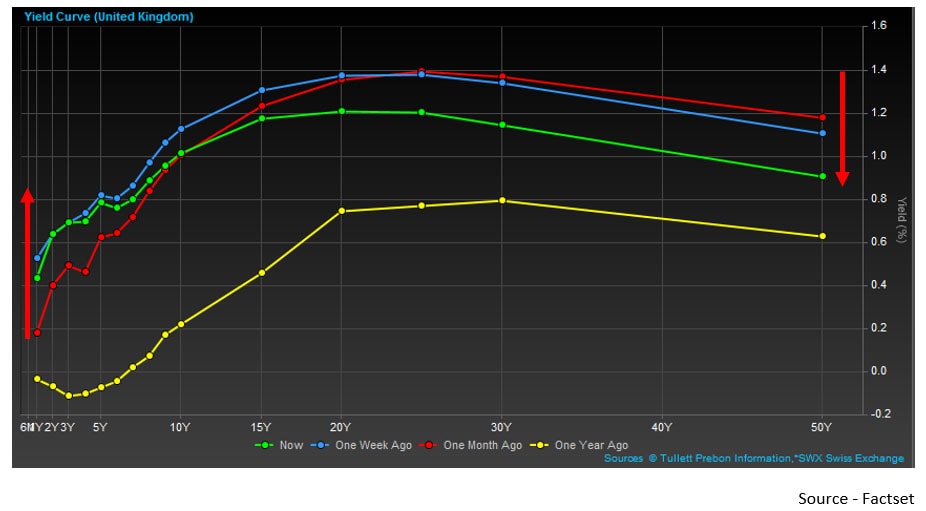 The bond market appears to be pricing in the potential for a policy error. Should this trend continue, the yield curve will invert. This is where short dated bonds yield more than longer dated ones as investors see immediate risks to the economy. Inversion is generally accepted to be where the 2 year yield exceeds the 10 year and has, historically, been a pretty good predictor of recession.

Are we headed for a recession?

Well, all economic cycles must end at some point and so the answer is eventually yes.

However, we see little risk for the coming few years. The yield curve is far from inverted and even then, inversion tends to predicate a recession by some time. Even then, analysis of market returns shows that handsome gains can be made in the 12-18 months before a recession. It’s also worth noting that stock markets tend to peak before an official recession begins.

The past couple of years have been characterised by bubble like behaviour in some areas of the market; “meme” stocks, Dogecoin, Shiba Inu (the latest “joke” cryptocurrency), NFTs, the list goes on. However, it is prudent to remind ourselves that for every trade there is a “winner” and a “loser”. For every newly minted millionaire, there is someone who has lost their life savings trying to jump on the latest craze.

As investors, we are constantly being shown what we could have won. That makes engendering good investment habits quite hard. As ever, I would encourage investors to think long term. Investing in a portfolio, market or company should be thought of in years, not quarters.

And (here I go again) diversification is absolutely fundamental to good long-term portfolio management. Yes, outsized returns can be made by betting all on black. But outsized losses can be made too. Our view is that good long term, risk adjusted returns, are preferable to attempting to be a hero.