After a short summer break, normal service is resumed, and the regular bi-weekly updates are back in full swing. It has been an eventful few weeks both geopolitically and for financial markets!

Firstly, let’s touch upon Afghanistan where the Taliban’s swift taking of Kabul and power in the country left global leaders dumbfounded and looking rather as though they had been sleeping on the job. I am not qualified to write about the history or politics here, but many will be wondering if the precarious situation on the ground in Kabul has contributed to the most recent bout of market volatility.

We cannot see any obvious link to the behaviour in financial markets. The Taliban claimed victory on the 15th August and, as we can see from the chart below, market nerves set in much earlier, in late June. That being said, geopolitical risk has undoubtedly increased dramatically as a result of these events and the wisdom of decisions made both UK and US administrations are now under fierce scrutiny. 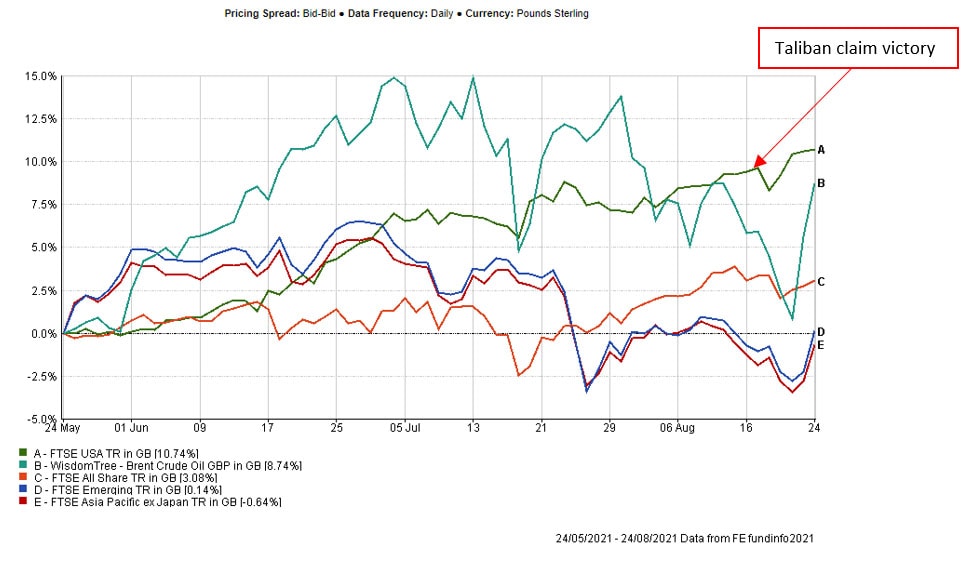 So, what’s going on? Well, closer inspection of the chart shows that the market wobbles have been most acutely felt in Asian and Emerging markets. This is a result of the Chinese government enacting a harsh new clampdown on some of its largest companies.

Arguably, the road to this was paved back in October last year when Jack Ma, the co-founder of internet giant, Alibaba, and one of China’s most visible billionaires attacked the Chinese administration for stifling innovation. Retaliation was swift and the Initial Public Offering (IPO – the process by which a company’s shares are first listed on a public stock exchange) of Alibaba’s fintech offshoot, Ant Group, was squashed and antitrust proceedings began against Alibaba. Jack Ma then vanished from the public eye for quite some time. The following chart shows what this very public display of the Chinese government’s power over China’s companies and citizens had on Alibaba’s share price: 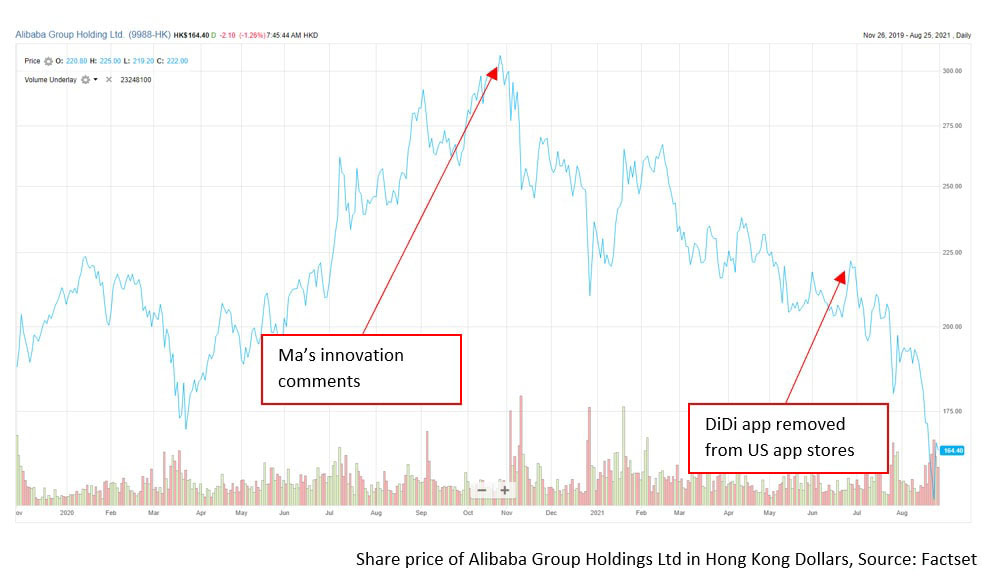 Some commentators feared the worst for Jack Ma, but he reappeared safe and sound although, funnily enough, not quite as vocal in his criticism of the Xi Jingping government.

Now, what many investors don’t realise is that China has been largely emulating California’s Silicon Valley for quite some time now, with so called tech “unicorns” springing up with surprising regularity. A unicorn is a term used for a start-up company, usually private held, i.e. not listed on a stock market, with a valuation of more than $1billion. But how to realise the value in these companies? Well, many chose the option of moving their headquarters offshore to a jurisdiction such as the Cayman Islands, in order to be able to access and list on US stock markets.

On Grand Cayman, some of the world’s most valuable (or at least they were) Chinese internet companies are listed. Alibaba, Meituan, Baidu and DiDi all have P.O. Boxes or addresses. But they are little more that rented mailing address with little or no operational value.

DiDi, for example, required this offshore address in order to be able to bridge the gap between East and West and list its shares on the US stock exchanges, which it did successfully on 30th June. Just a few days later, following a security review, US regulators demanded that app stores remove DiDi’s apps. This appears to have been a move orchestrated by the Chinese government with some commenting that that DiDi was, perhaps getting a little too big for its boots. 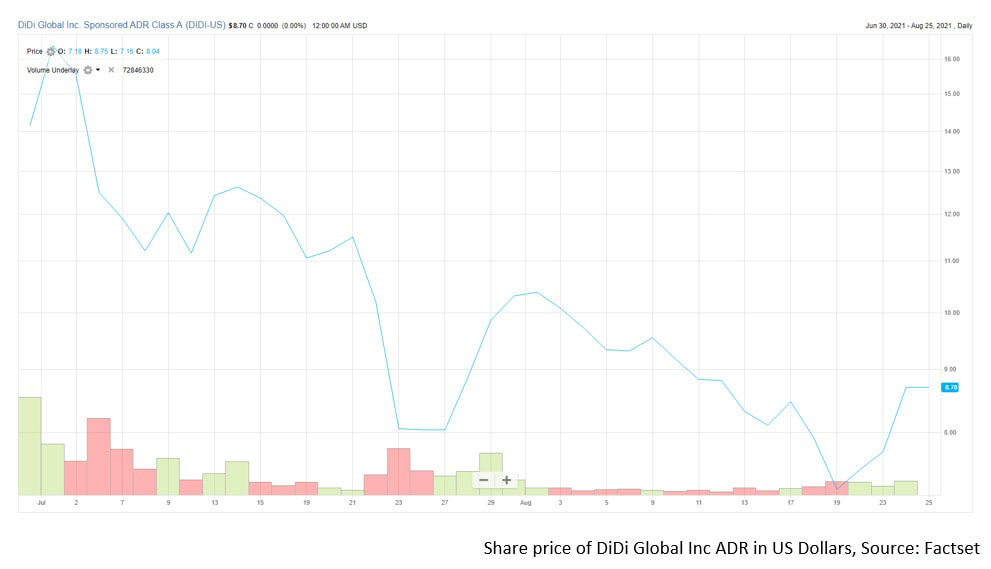 More recently, a sweeping new regulatory framework for the online education industry, which the Chinese government said had been “hijacked by capital” was introduced and it then said that online food platforms (think JustEat) must pay workers at least the local minimum wage. This caused a precipitous fall in the share price of delivery giant Meituan, which was already under investigation for monopolistic behaviour.

All this is a stark reminder to all that no company will be allowed to threaten the power of the Chinese Communist Party and that they have far reaching powers to clampdown on any entities which they feel may be getting out of hand. I would hasten to add that this is not purely a Chinese phenomenon, the tech giants Facebook, Twitter, Amazon etc have been under scrutiny in the US for some time now. The key difference is that, in the West, there are annoyances such democracy and free speech that get in the way of any swift reform.

So, does this make Chinese internet firms uninvestable?

Well, it depends on who you speak to. Some fund managers say that this is just the beginning and that stock pickers running Asian and Emerging Markets funds will need to be far more selective from here on. Others say that these are still intrinsically robust and exciting companies and that this is a flash in the pan during which China is flexing it’s, not inconsiderable, muscles. After all, what is a small dent to profitability to these massive, highly cash generative businesses?

It is these differences in opinion that we seek in our fund managers. We deliberately try and pair fund managers with different world views and behavioural biases. How do we ascertain these? Well, this is where expert due diligence and probing questioning can add value over the long term. If one can successfully do this, you should be able to smooth your investment returns and generate attractive, long term, risk adjusted returns.