What’s going on in bond markets?

We hope that you enjoyed the last video update. It feels like an awful lot has happened in the interim which I will do my best to distil to a digestible and interesting piece.

These pieces are usually centred, to a large degree, on the movements in equity markets. In a break from the norm, this time we are going to start by looking at the bond markets, where movements have been quite extraordinary.

You may remember that bond yields in the developed world rose sharply at the beginning of the year as investors priced in higher inflation numbers, which have now materialised. This was to be expected although the pace of the increase in yields, and so the fall in prices, took some by surprise. 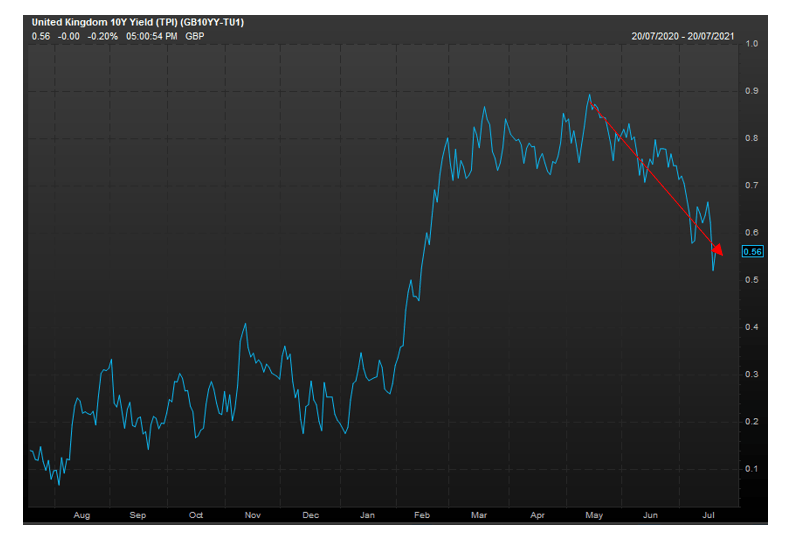 This chart shows the yield on the 10yr UK Government Gilt. We can see that the yield has retraced almost half of its rise through the first quarter of the year. But why?

Well, I must start by saying that for us, and most strategists we speak to, the movement feels overdone and doesn’t make a huge amount of sense. However, our best guess is that bond markets have become worried about economic growth slowing more quickly than previously expected. You may remember that I have previously shown a table of forecasts from a sample of economists, which predicts that economic growth peaked everywhere in the developed world in quarter two, with the exception of Europe and Japan whose GDP growth is expected to peak at some point this quarter. Nonetheless, whilst slowing, GDP growth is expected to stay reasonably strong through the rest of this year into next.

So, it would seem that the market is now worried that this slowdown may be more severe, largely (we think) because of the spread of the highly contagious Delta variant around the world. The pickup in new confirmed cases of Covid is certainly alarming and, as mentioned in the video last time, the Delta variant accounts for roughly 90% of new cases here in the UK.

The good news is that the vaccines appear to be doing a good job by significantly reducing the number of hospitalisations and deaths, as shown above. So, what has got the market so spooked?

Our best guess is that markets are worried that governments in the US, UK and Europe will have no choice but to reinforce restrictions on movement in the face of a huge third and fourth wave of infections. Japan has already done so and the Olympics may not proceed at all due to Covid.

Indeed, it is telling that the financial markets moved in earnest on Monday 19th July, so called “Freedom Day”. There are also secondary effects of the measures that have been put in place to control the spread of the virus. Here, we have the “pingdemic” whereby huge swathes of children, parents and workers are being told to self-isolate as they have been in contact with an infected individual. Reflecting on the chart above, this could easily turn into another pseudo lockdown with a large proportion of the population unable to work because they are either self-isolating or having to look after children. Perhaps the summer holidays will relieve a little bit of the pressure.

Vaccine uptake slowing in the US

Over in the US, the situation is not too rosy either. We mentioned that vaccination rates in the US are slowing and the daily numbers are alarming: 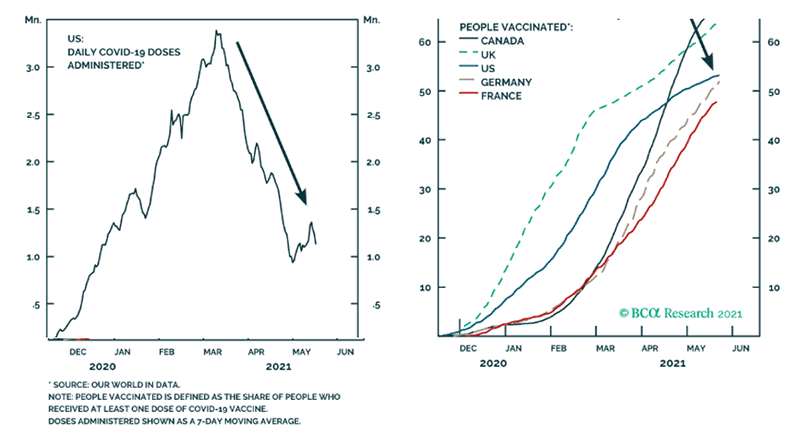 These numbers suggest that the politicization of vaccines in the US is now having a material impact on progress as those who are willing to be vaccinated already have been. The fear is, therefore, that an epidemic among the unvaccinated will result in more restrictions on movement and these come with consequences for the economy.

Our view is that the movements in the markets are overdone. Equity markets fell sharply on Monday, with the FTSE 100 down nearly 2.40%. The US Dollar also rallied hard, particularly versus Sterling as investors sought safe havens, although Sterling was, perhaps, a little rich versus the Dollar anyway.

At this point, I would like to reassure readers that none of this materially changes our medium-term view that economic growth will slow, from very high levels, gradually over the next 12 months. We see very little recession risk and continue to believe that inflation will be relatively high into the beginning of next year but will indeed turn out to be transitory as base effects of energy prices and bottle necks in supply chains work themselves out. We also believe renewed restrictions on movements are, politically, highly unpalatable, and governments will be loath to act.

Before I go, I also wanted to touch on the world’s second largest (largest on some measures) economy, China. China was the first into the global pandemic and also the first to reopen its economy. The rebound in economic growth in China is already slowing and we are mindful of the impact that this could have on the global economy, markets and portfolios. 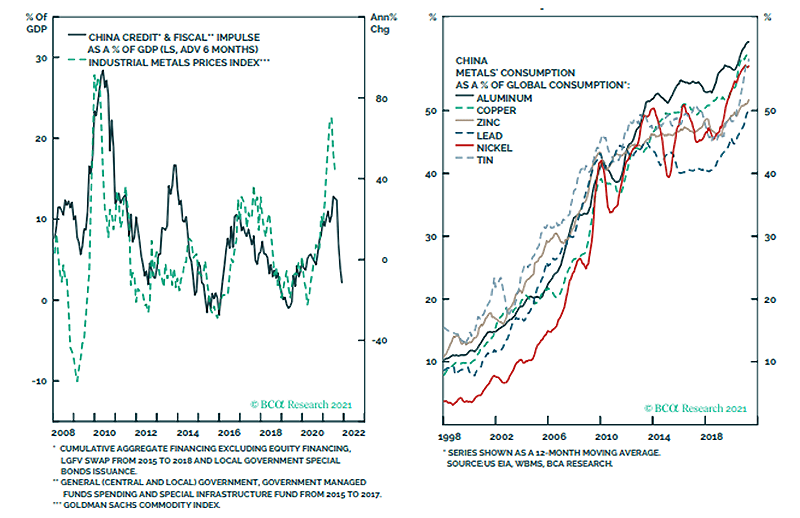 China slowing could negatively impact base metal prices in the short term which could then have a knock-on effect on the share prices of miners and industrial production companies.

We should also consider the impact on the wider global economy. If China slows then the rest of the world slows with it, particularly its closest trading partners, the US, Europe and Japan. Again, this does not materially alter our medium-term view, for the time being. However, it is a dynamic, along with inflation, that we are watching closely.

Finally, it wouldn’t be terribly British of me not to make some mention of the weather. Whilst glorious, it does feel rather extreme and I cannot help but think of the people of the northern US and Canada who have had to endure temperatures of 40 degrees or more. Who says climate change isn’t real?

Until next time, stay safe.