How will Covid affect the markets in H2?

I hope that everyone, so inclined, is enjoying the Euros. Despite increasing numbers of new cases of Covid in the UK, sporting events such as these help to reinforce the feeling that things are, indeed, returning to normality. Not being a football fan, I will endeavour not to make too many football analogies in this update.

Pandemics and epidemic infection rates do come in multiple waves and so we should not be surprised at this development. Clearly, the strategy Governments have adopted is to fully vaccinate as much of the population as possible, as quickly as possible, in order to prevent people contracting the virus and getting seriously ill.

As the Prime Minster recently warned, however, we could be in for a difficult winter. Viruses tend to transmit more easily during winter, when people spend most of their time indoors. Stories of hospital emergency departments being overwhelmed and the NHS being under extreme pressure are still common and so it would be foolhardy to think that we are out of the woods just yet. Nonetheless, far fewer people are getting seriously ill as we find more effective ways of treating the disease and for that we must be grateful.

Should we see restrictions on movement reintroduced during the winter months, this could have a negative impact on markets and reinforce stresses on global supply chains. As I have discussed before, disruptions to supply chains around the world, for example the global shortage in computer chips, is a contributor to the higher inflation numbers that we are currently seeing.

Markets react to the US Federal Reserves unexpected announcement

Whilst I am conscious that inflation has been the topic of discussion for the past few months, it really is the key focus of markets and investors at the moment. Last week the US Federal Reserve gave investors a somewhat hawkish surprise. That is to say that the comments made were indicating tighter monetary policy than the market expected.

If we cast our minds back to March, the Fed projected no interest rate rise in the US until 2024. The announcement last Wednesday jolted markets as the Fed signalled that it may raise rates twice in 2023. Whilst this may not sound like a big deal, in a world where interest rates are so low, even the smallest change can have big effects.

The Fed’s view, or dot-plot, is now converging on market expectations, as shown in the chart below, although the latter are proving to be a moving target: 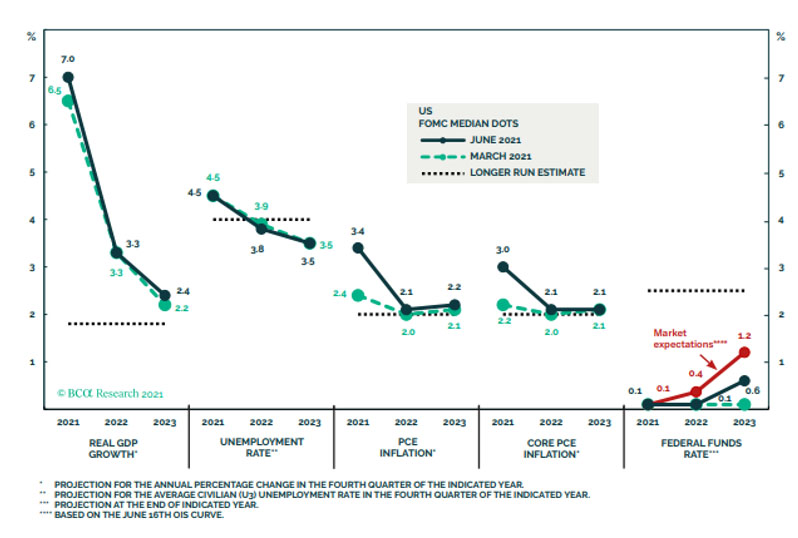 At his press conference, Chair Powell acknowledged that FOMC members had discussed scaling back their programme of Quantitative Easing (buying US Government bonds in order to increase the amount of cash in the financial system). “You can think of this meeting as the ‘talking about talking about’ meeting,” he said. A rate hike in 2023 would imply the start of tapering quantitative easing early next year.

After the announcement, some relatively large movements in markets ensued. Global equity markets fell by 1.5% -2%, depending on the country or region, and the US Dollar strengthened significantly against most currencies. Somewhat counterintuitively, US Government bonds fell (one would expect them to rise on the expectation of tighter monetary policy):

The key question for investors is whether last week’s announcement marks the first of many hawkish surprises from the Fed. As I have discussed at length, we are of the view that it does not. However, the risks are certainty to the downside.

As Chair Powell himself noted, the dot-plot is “not a great forecaster of future rate moves,” before adding that “Lift-off is well into the future.” Ultimately, a major monetary tightening cycle would require that inflation remain stubbornly high. As I have discussed before, while there are good reasons to think that the US economy will eventually overheat, the current bout of inflation is indeed likely to be “transitory.” This implies that bond yields are unlikely to rise into restrictive territory anytime soon, which should provide continued support to stocks.

We have a tricky market to navigate

Arguably, economies and markets are moving into a new phase. Those investing from March last year have made very good returns, but these will be harder to come by from here. We believe that developed market economic growth is likely to have peaked and will roll over in the 2nd half of this year and into next. Add to this the increasing risk of the Fed being forced to raise interest rates earlier than expected, and we have a tricky market to navigate with few discernible drivers. Style factors, i.e. cyclicals versus defensives, have been broadly flat over the past quarter albeit with large moves in-between, which makes investors’ jobs ever more difficult.

Can you use your team’s past performances to predict a Euro win?

Now, I opened by saying I would try to avoid football analogies but, it is the Euros after all so here it goes. Football pundits or those who bet on the outcome of matches are, in some ways, very similar to market participants. Some may claim to be able to predict the outcome with certainty. In reality, however, they are using historical information, combined with their own behavioural biases, to make an educated guess. Football fans will use their knowledge of a team’s past performances, which cannot be used as a guide to the future (sounds familiar?) the make-up of the team and a myriad of other inputs to come up with their own best guess as to what might happen.

Investing is, for all intents and purposes, exactly the same. We study and analyse historical data, get to know our team members’ strengths and weaknesses, under what conditions they play well and those in which they do not. We then construct the best possible team (portfolio) using an appropriate blend of players (funds) in order to try and achieve the best risk adjusted outcome for our clients.

As I said at the beginning, I am not a football fan, so I hope that made at least some sense.