This is a time of the year associated with new beginnings. Easter, the start of British summer time (someone tell the weather please), the start of the new quarter and the beginning of the new Tax Year converge with successful vaccination programmes and an easing of lockdowns. There seems to be palpable optimism in the air.

Speaking of new beginnings, President Biden has set out his ambitious “American Jobs Plan”, a $2 trillion package of measures. In many ways, “ambitious” does not do the proposal justice, which aims to tackle the U.S.’s most pressing problems, including “crumbling” infrastructure, unequal access to broadband, climate change and care for people with disabilities and the elderly.

These proposals will be applauded by many, but the big question is how they will be paid for. Remember, this comes merely a few weeks after Biden’s $1.9 trillion fiscal package was signed into law, sending $1,400 stimulus cheques to most American’s and extending employment benefits.

So where is all this money to come from? It is expected that the proposals will, at least in part, be paid for by raising the corporate tax rate and global minimum tax. Many of these measures would reverse the Trump administration’s 2017 tax cuts, which provided a tailwind to US equity markets. This poses two big questions for investors. Will the measures cause the US economy to overheat, thus forcing tighter monetary policy via higher interest rates? And, what will the effect of the increases in corporate taxes be on companies’ earnings?

However, it is important to note that many Republicans and prominent US business groups, including the US Chamber of Commerce, have signalled their opposition to the plan, particularly the proposed tax increases, arguing that they would damage US investment and competitiveness in the Global market. Given the cost of the package and resistance in the Republican party to tax increases, whether the package will pass through congress is uncertain.

As readers know, financial markets have been worried over prospects for higher inflation and, thus, higher interest rates since the beginning of t he year. This has been characterised by a steep rise in Government bond yields, as markets price in the prospects for higher economic growth. Interestingly, US bond yields have been relatively stable over the past few weeks, indicating that the market has either already priced in the $2 trillion package, or is not yet concerned given the infancy of the proposal’s passage through congress:

Nonetheless, there remain concerns that the US economy could overheat. As of January, US households were sitting on around $1.7 trillion in excess savings. About two-thirds of those savings can be attributed to reduced spending during the pandemic, with the remaining one-third arising from fiscal support. The recently passed fiscal stimulus bill will boost household savings by an addi­tional $300 billion, bringing the stock of excess savings to $2 trillion by April: 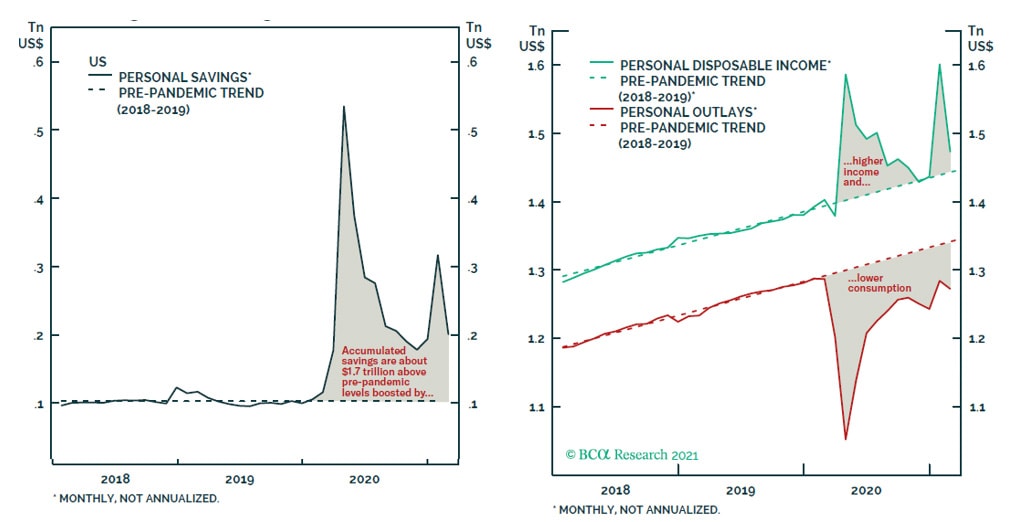 This hoard of cash should support spending. Already, real-time measures of economic activity have picked up. Traffic congestion in many US cities is approaching pre-pandemic levels: 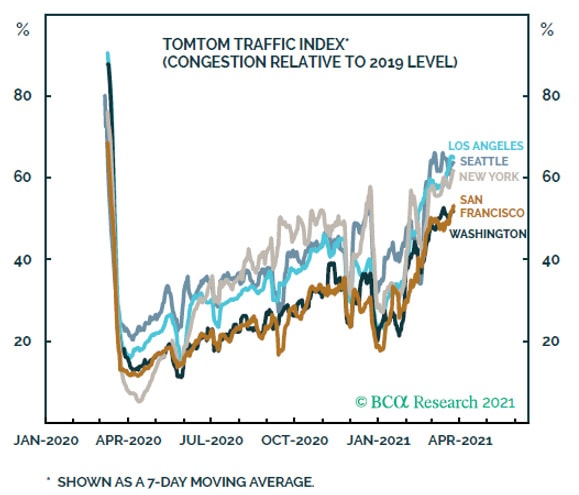 J.P. Morgan reported that spending using its credit cards rose 23% year-over-year in the 9-day period through to March 19 as stimulus payments reached bank accounts. Anecdotally, airlines and cruise line companies have been expressing optimism on the back of a surge in bookings.

Meanwhile, the supply side of the economy could face temporary constraints. Under the stimulus bill, close to half of jobless workers will receive more income through to September from extended unemployment benefits than they did from working. This could limit labour supply at a time when firms are trying to step up the pace of hiring.

Therefore, the risks of the economy overheating are skewed to the upside. However, our best guess is that inflation will remain within tolerable levels and will not become a real problem for central banks until around the middle of the century. Clearly, we could be wrong. The danger is that inflation tends to move very quickly indeed, catching markets by surprise.

On balance, we don’t believe the Government bond yields will continue to rise at the pace they have been. However, there is a risk that they do rise a little from here and so we, as ever, urge investors to take a balanced approach. Consensus seems to be that high inflation and all its consequences is the ultimate destination. The route and time of arrival though is highly uncertain. Therefore, we prefer not to take outsized bets on any particular style or sector, but instead rely on tried and tested long term diversification.