Steven Lloyd comments on the market impact of Brexit negotiations

As we approach the end of the year, which many will be keen to put behind them, we also draw ever closer to the self-imposed deadline to finalise trade negotiations with Europe.

We cannot predict with any certainty what the outcome of the negotiations will be although news flow and posturing, from both sides, has certainly increased over the past few weeks, as predicted. Many clients have been asking whether we have altered our investment strategy as a result of the upcoming deadline.

As we know, Sterling fell in value versus most developed market currencies immediately after the referendum in 2016 and has been volatile, but largely range bound, ever since. The movements of Sterling (GBP), particularly versus the US Dollar (USD), are seen by many investors as a good proxy for Brexit risk but we must remember that there are a multitude of other factors which affect the relative value of the two currencies.

Nonetheless, GBP vs USD can have a significant impact on the UK stock market. This is because large, multinational, companies often earn a large proportion of their income in the world’s reserve currency, Dollars. Therefore, as GBP weakens vs USD, their earnings become relatively more valuable. The opposite is also true.

Following the market bottom in March, the US Federal Reserve injected huge amount of money into the financial system, weakening USD. The market also priced in a “V-shaped” economic recovery which also had the effect of pushing the relative value of USD lower. This means that we have seen a significant strengthening of GBP vs USD since then: 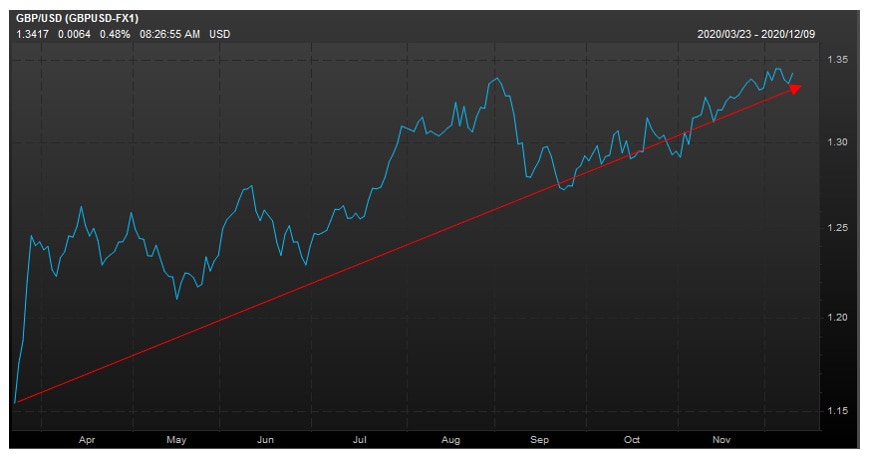 This currency effect has clearly been demonstrated in UK markets over the same period, with indices of smaller and medium sized companies outperforming the largest companies by a significant margin: 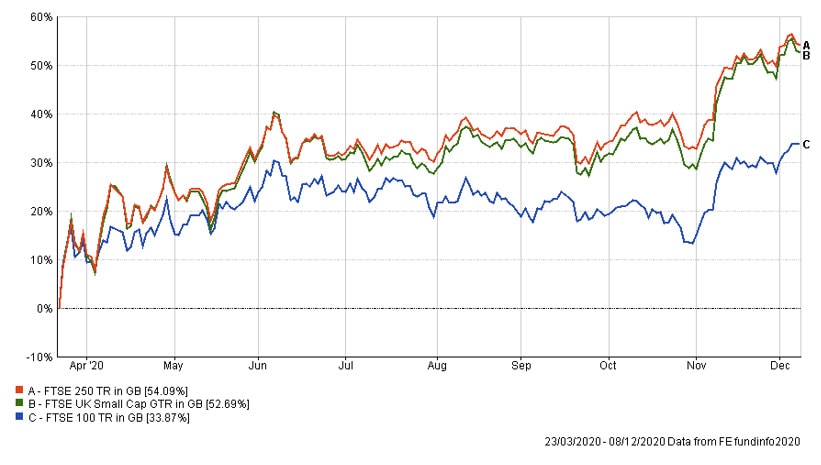 So, what does this mean for portfolio positioning? Well, as mentioned, we cannot predict the outcome of the negotiations with any certainty. We do think that there will be a deal of some sort as it is in the interest of both sides to come to an agreement. However, we think that this will be in the 59th minute of the 11th hour.

Whilst the market may get very excited about this, there is a chance that any initial exuberance will be tempered by reality once the details of any deal are digested. Quite simply, we do not believe that there has been enough time to come to a fully formed and detailed trade deal. Therefore, we could see some disappointment in the markets later down the line. In this scenario, we see a sharp increase in the value of GBP vs USD initially followed by some retracement of the move.

Of course, “no deal” is a very real possibility. In this scenario, we see a large fall in GBP and with-it outperformance of companies with significant USD earnings.

So how should we position portfolios? Well, the outcome is binary and unknowable. So, I’m afraid I am going to bring out my broken record again because we believe that the best way of positioning for these types of events is not to. Instead we advocate hedging your bets and ensuring that portfolios are diversified by market capitalisation and style. This way, portfolios should not get buffeted by binary events too much.

This is my last update for the year so all that is left is for me to wish you and your families a very happy Christmas and New Year. I hope that 2021 will be less eventful but markets have a way of surprising us. We will continue to be as vigilant as ever to ensure great client outcomes.