Much to the consternation of people across the UK, and particularly the North of England, our freedom of movement is being further restricted due to the resurgence in new cases of Covid-19.

Boris Johnson announced the “three tier” system for England on Monday and Scotland and Northern Ireland are soon to impose new measures as well. Whilst difficult to accept for most, the second wave was to be expected and is a phrase which has been in the common vernacular since early April.

But, just how bad is it? Well, it is difficult to honestly say. The increase in testing around the world is bound to mean an increase in recorded cases and let’s not gloss over the blunder in recording adding thousands of cases overnight. Having said that, the charts are stark both for the UK and much of the developed world:

Whilst the new system in England is designed to be a more targeted and precise way of control the spread of Covid-19 than a national lockdown, we simply cannot know whether it will be effective or not. The reason I am mentioning this is that the restrictions of movement are likely to constrain consumer confidence for some time to come and will place further pressure on businesses.

Over in the US consumer confidence and the stock market have, historically, moved in lock step with each other. Over this year that relationship has broken down and so we see potential for vulnerability should the market not get its next sugar (liquidity) rush from fiscal and monetary policy, or if a vaccine is not forthcoming: 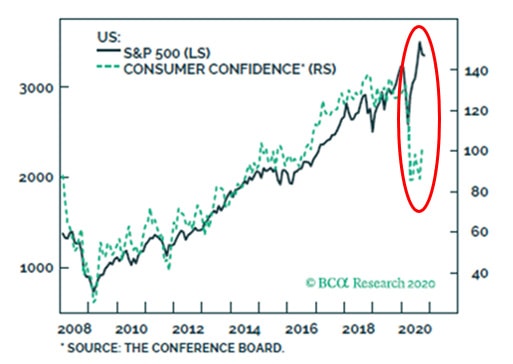 Staying in the US, the presidential election has been thrown into (ever more) uncertainty following Donald Trump and a large proportion of his close team testing positive for Covid-19. As you would expect, he received immediate medical attention, the likes of which is out of reach for civilians, and made a speedy recovery.

President Trump’s typical bombastic and defiant style in the face of the illness appear to have bolstered his favour but only amongst his core base of supporters. Opinion polls and betting odds still point to a “blue sweep” whereby Biden wins and the Democrats control both the House and the Senate: 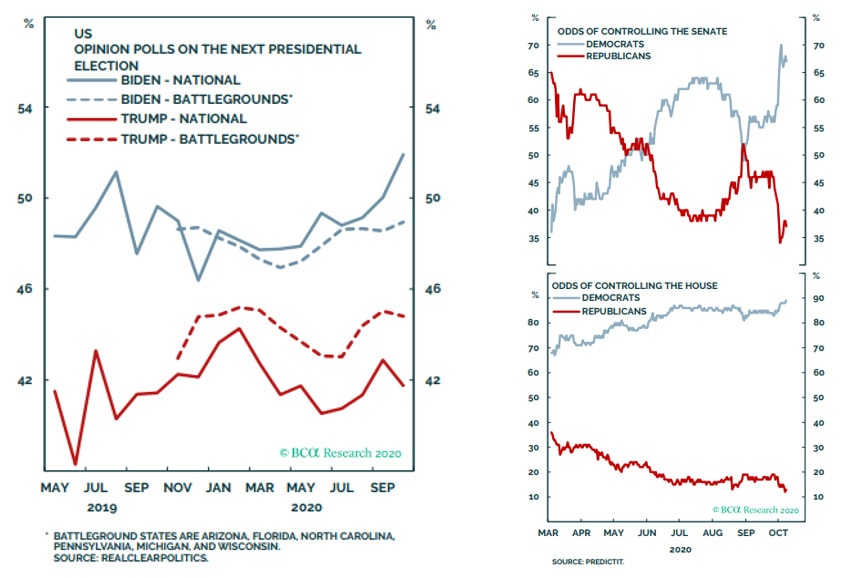 What would the market implications of a “blue wave” be? As ever, it is impossible to know exactly but we can make some educated guesses.

On the negative side, Biden has pledged to raise the corporate income tax rate from 21% to 28%, bringing it halfway back to the 35% rate that prevailed in 2017. He has also promised to introduce a minimum 15% tax on the income that companies report in their financial statements to shareholders, raise taxes on overseas profits, and lift payroll taxes on households with annual earnings in excess of $400,000. Together, these measures would reduce S&P 500 earnings-per-share by 9%-to-10%.

On the positive side, US trade relations with China would likely improve if Joe Biden were to become the president given his more moderate approach when compared to Trump. Biden has roundly criticized Trump’s tariffs, citing negative impact on American agriculture and manufacturing has pledged to honour multilateral agreements.

Fiscal policy would be further loosened in a blue wave scenario, an outcome that the stock market would welcome. Voters would also applaud more pandemic relief. At this point, the odds of Republicans and Democrats agreeing on a major new stimulus deal before the November elections look increasingly slim. If Biden wins and the Republicans lose control of the senate, the Democrats would likely enact a stimulus package worth $2.5-to-$3.5 trillion shortly after Inauguration Day on January 20.

In addition to pandemic-related stimulus, Joe Biden has called for around 3% of GDP in spending on infrastructure, health care, education, climate, housing, and other Democratic priorities. Only about half of those expenditures would be matched by higher taxes, implying substantial net stimulus for the economy.

In aggregate then, it is possible that the overall impact on the value of the S&P 500 would be small, because some negative repercussions from a Democratic sweep would be offset by positive ones.

Finally, a short note on the development of a vaccine. This week has already seen some small market wobbles on the news that Johnson & Johnson halted their vaccine trials due to unexpected illness in a patient. The market, therefore, seems to have “priced in” a viable, mass producible vaccine being available in the not-too-distant future.

Experts in the field are converging on the expectation of a vaccine being widely available by the end of Q3 2021, with about 55% expecting one earlier by the end of Q1 2021: 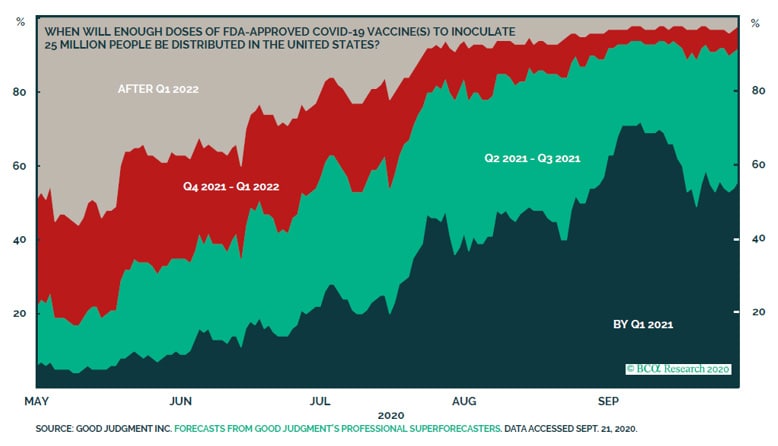 However, even if we do get a vaccine, big questions remain. Will the public be confident enough, in a vaccine which has been developed and tested at breakneck speed, to take it? And will enough people take it to slow the spread of the virus? Who knows, only time will tell.

I appreciate that these updates can seem full of vagaries and guess work. Unfortunately, the world is still a highly uncertain place. However, our message remains clear. During times of uncertainty, professional asset allocation, portfolio construction and management can pay dividends (excuse the pun), if only by helping with peace of mind.