Volatility in financial market remains at relatively elevated levels as tension between the hopes for a smooth exit from lockdown, testing and vaccinations and economic outlook persist.

As I have discussed previously, Governments and central banks around the world have been quick to throw money at their economies through both monetary and fiscal easing. As the depth of the fall in economic activity becomes more apparent, some are now questioning whether the actions taken so far are going to be enough to stave off a protracted, shallow, recovery in activity.

In the UK, we have seen the number of people claiming unemployment benefit jump by 856,000 to 2.1million in April alone. Furthermore, there has been a record quarterly fall in the number of new Job openings from 807,000 in February to 637,000 in April: 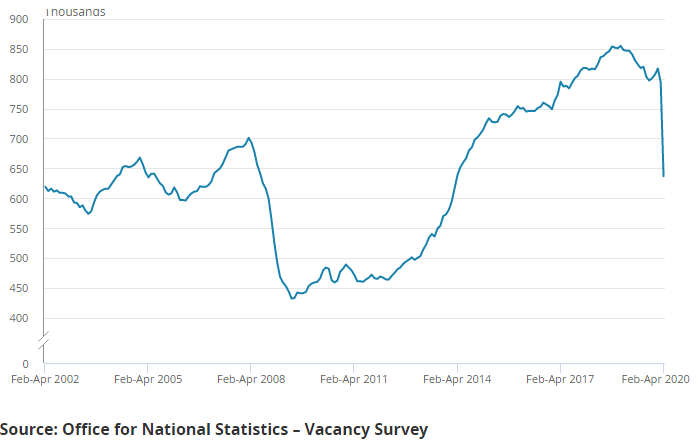 These poor job market dynamics have meant that even more unconventional monetary policy is now being actively discussed both here and in the US. I am referring to negative interest rates.

Firstly, it is important to say that negative interest rates are an experiment, the likes which the world had not seen prior to the Global Financial Crisis. The central banks of Europe and Japan theorised that by imposing a “tax” on depositors whilst simultaneously rewarding borrowers, they could encourage higher levels of borrowing, spending and risk taking on the part of consumers and investors. They also surmised that negative interest rates would make their currencies less attractive, thus forcing out foreign investors and boosting export demand.

This all sounds great in theory, but the jury is out whether this has translated into reality. The key mechanism in making negative interest rates work is the banks, which have shareholders and profits to think about. Quite simply, it is not profitable for banks to pay people to borrow and so they have been deterred from lending more generally. This put enormous strain on banks’ profitability and means that the expected new loan growth hasn’t materialised. Therefore, if consumers, businesses and investors aren’t borrowing and investing they are saving and taking less risk. The opposite of the desired effect.

So, what of the impact on investments? Financial markets are likely to view the implementation of negative interest rates positively. The theorised greater lending and risk taking could bolster equity prices and drive down yields on bonds, thus pushing up the price. However, for bond investors, the new paradigm causes some issues. An investor buying a bond offering a negative yield who holds it to maturity is guaranteed to lose money. Therefore, skill is required to navigate bond market effectively and avoid losses.

Even lower yields on bonds also means that investors who require an income may be forced to take more risk by investing in equities, which offer considerable higher levels of income from dividends. However, there have been several high-profile dividend cuts recently as the economic lockdown impacts the profitability of businesses and their ability to pay dividends.

As with most aspects of life at the moment, how this will play out is highly uncertain. For now, the US Federal Reserve (Fed) has dismissed the idea of negative interest rates in the US, but their hand may be forced by markets. Here in the UK, money market traders are betting that we will have negative interest rates by the end of this year as comments from the Bank of England’s (BOE) Chief Economist, Andy Haldane, fuelled speculation that policymakers are open to the option.

For now, we sense a reticence toward negative rates, and we think that the Fed and BOE are more likely to exhaust other policy options such as an expanded Quantitative Easing programme before embarking on another financial experiment.