Well, there has been no shortage of news since I wrote to you last. I’m sure most have been following the drama of the US elections over the past two weeks. One thing that is certain is that the much talked about “blue wave” hasn’t reached shore.

Most, except Donald Trump and his close allies, have called Democrat Joe Biden as the President-Elect although four states have yet to declare results. As you will be aware, it is not the popular vote which wins in the US electoral system, instead they have an electoral college and Biden is projected to win 279 of the 270 college votes needed in order to win. However, the Republicans look like they will retain control of the Senate with the Democrats controlling the House.

So, what does this mean for markets? Well, the lack of a blue wave means that some of Biden’s policies will be more difficult to enact. Policy items such as tax increases on corporations and fiscal spending will face opposition from Republicans, particularly on the fiscal front. While President Trump is an advocate of a big fiscal easing package, to help the US economy recover from the effects of the pandemic, many Republican are not. Therefore, Biden’s fiscal programme may be watered down and Republican senators have little incentive now that they don’t have a Republican president to appease.

In the week following the election, markets took the projected results to mean more of the same. That is, less spending than anticipated and lower interest rates for longer. This means that high growth names, particularly mega cap technology stocks, found some strength after experiencing some volatility in the run up to the election.

But, and this is a big ‘but’, this week we had the promising news that Pfizer and BioNTech have seen good results from the phase three trials of their Covid-19 vaccine. This is hugely exciting, but we feel that Governments are right to set a cautious tone. Firstly, the drug must still be approved for widespread human use and then it must be manufactured en-masse. Then, there are the huge logistical challenges posed by transporting and storing the vaccine which needs to be kept at a temperature of -70 degrees Celsius. This will be problematic to say the least in the developed world but infinitely more so in developing nations without the required infrastructure.

Nonetheless, the markets have taken this news very positively indeed with global equity indices posting very strong gains on Monday, the day of the announcement. Of particular note is the aggressive rotation away from “growth” and into “value” stocks.

I have written before about some of the large dislocations present in markets and the valuation of growth companies versus more economically sensitive ones is something that the investment community have been debating for some time now. The news of a promising vaccine on the near horizon might mean that economies could recover quicker than anticipated as we can all get back to “normal”. This has meant that economically sensitive securities, including Oil and other commodities have bounced sharply this week. This can be clearly seen in the following chart which shows the relative performance of “growth” and “value” stocks in the US:

I do feel it is important to put the above into perspective. When we look over a longer time frame, 10 years, we can see that “value” still has a lot of catching up to do:

As you might expect, those areas of the markets which has been hit particularly hard by the pandemic, such as leisure, cruise lines and aerospace have enjoyed outsized returns as investors reassess their potential fortunes: 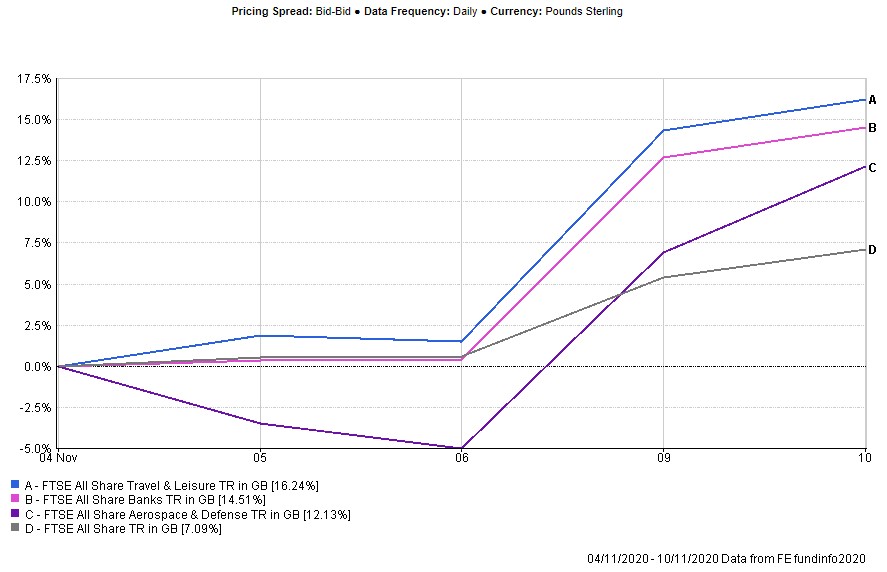 Optimism around the news has also been felt in the bond market. As I have written before, bond yields around the world were at all time lows but have bounced sharply recently. Because bond yields are inversely related to their price (yields up = price down) bond investors have not had quite such a comfortable ride: 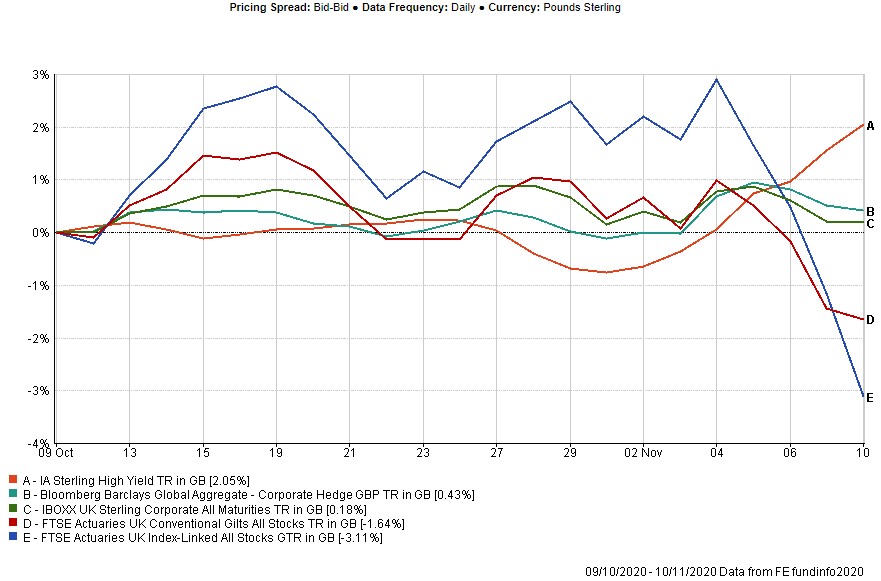 2020 then, continues to surprise and challenge investors and asset allocators around the world.

Does this mean that we should all rush to sell our growth stocks and bonds so we can pile into “value”?

Well, no. While the market movements this week have been extreme, investors do have a habit of initially over-reacting to news. While the news from Pfizer and BioNTech on Monday was very promising indeed, we mustn’t forget that economies are still reeling from the effects of the pandemic, of which the 2nd wave appears to be intensifying, not subsiding. The negative effects on economies is manifesting itself in higher levels of unemployment, more business closure and tighter bank lending standards:

Not only are economies in bad shape, we may see further volatility around the US election as President Trump is mounting numerous legal challenges and is expected to demand recounts from several states.

To summarise then, momentum seems to be with economically sensitive areas of the market for now. As ever, we wouldn’t encourage investors to introduce large biases to their portfolios. Regular readers will know that we are firm believers in pragmatic portfolio construction with exposure to numerous asset types, geographies and styles. While it is very tempting to chase short term momentum, market timing around short term trends is extremely difficult and, often, a destructive investment strategy.