The humanitarian crisis in Ukraine continues to deepen with little sign of any cessation of the conflict. The knock-on effects of the sanctions imposed on Russia on all our wallets, that I wrote about last time, continue to take effect with fuel prices at the pump reaching all time highs.

The law of unintended consequences is also making itself felt with recent reports on increasingly audacious fuel theft from trucks and oil tanks on rural properties. For those living in rural locations, this is a double whammy on their cost of living as properties not supplied by the national grid were not protected by the soon-to-be-removed price caps and have been subject to wild fluctuations in the cost of oil. Anecdotally, the price is so volatile that suppliers will not confirm the cost until the day of delivery.

Consumers starting to feel the pinch

As we all know, the inflation that the UK economy is now experiencing is not just confined to fuel and energy prices. The price rises are becoming broader based as a multitude of commodity prices have been impacted, first by the global recovery from the pandemic-induced lock downs and now by the conflict in Ukraine and subsequent sanctions on Russia. Arguably, some of the economic pain we’re now experiencing is self-inflicted. As I mentioned after the first sanctions were imposed against Russia, sanctions often carry a cost for the imposer as well as those being sanctioned.

Interest rate rises in the UK and US

The dramatic rise in the cost of living in the UK was mentioned in the last Bank of England Monetary Policy Committee (MPC) meeting where committee members appeared cognisant that raising interest rates too quickly would compound the difficulties consumers are already experiencing. Nonetheless, the widely expected 0.25% interest rate rise from 0.50% to 0.75%, was announced. But the market appeared to take some short-term comfort that the MPC were aware of the economic impact of rising rates too aggressively.

Over in the US, the Federal Reserve (Fed) went ahead with its well-telegraphed rate rise of 0.25%. The Fed has been talking about raising interest rates and reducing the size of its balance sheet (effectively removing cash from the financial system and tightening monetary conditions) for quite some time and the markets took the announcement in their stride. However, the shape of the US Treasury yield curve is flagging some potential worries.

What is the yield curve and why does it matter?

The yield curve is simply the income yield on government bonds, across all maturities, plotted on a chart.

Ordinarily, the curve slopes upward when investors are optimistic about the prospects for economic growth and inflation. This is because buyers of government debt typically demand higher yields in order to lend their money over longer periods of time. After all, the longer the loan period, the greater the risk of not receiving either an income payment or the loan back in its entirety. Therefore, it is logical that investors demand a higher income yield for longer loan maturities to compensate for these risks.

However, when investors become very concerned about an imminent recession, the yield curve can become “inverted”, i.e. downward sloping. This is because investors expect interest rates to be cut into a recession and so demand a lower income yield for longer maturity bonds.

An inversion of the 2-year and 10-year bond yields (i.e. 2-year bonds yield more than 10-year) has predicted every recession over the past 50 years. The signal is so widely followed that one might question whether it is truly predictive or so ingrained in investor’s psychology that it is a self-fulfilling prophecy. Whichever way you look at it, the difference in yield between 2- and 10-year government bonds is something we should watch quite closely: 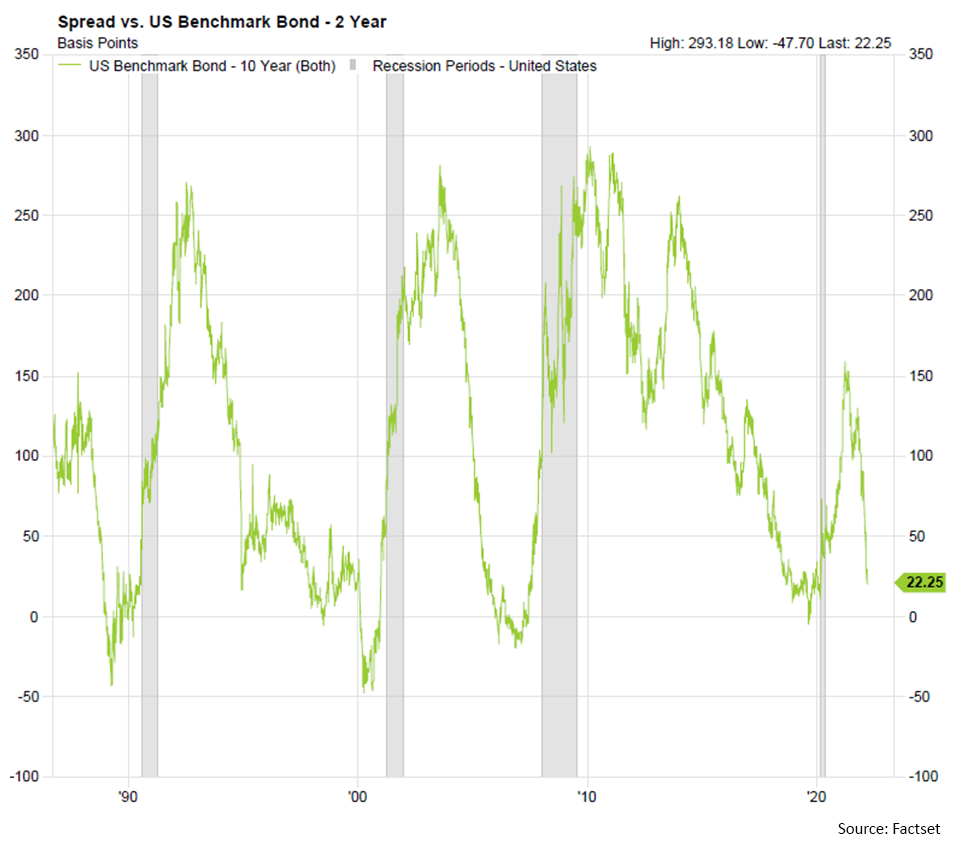 We can see that the spread going below zero has preceded each recession in the US (shown by the grey shaded areas) although the time lag between inversion and recession varies. We can see that the spread between 2- and 10-year US Treasury bonds has narrowed sharply over the course of this year, indicating that investors are becoming increasingly worried that the Fed will not be able to both tame rampant inflation and avoid a policy induced recession.

Should we be worried?

Whilst the US yield curve is not inverted yet, its predictive power means it is something we are watching closely. However, even when it does invert, investors have some time to think about repositioning portfolios before the onset of the next recession, which would usually result in weaker returns for equities.

The lead time between yield curve inversion and recession tend to be long and variable. The historical average has been 12-18 months but has been as long as four years. It should also be noted that equity markets tend to peak before a recession is officially recognised.

So, according to the bond market, we have some time to go before we see a recession in the US. Nonetheless, the warning signals are becoming stronger.