Note - markets are highly volatile, and the geopolitical situation is fluid. All data is correct as of 8th March 2022.

Sitting to write about financial markets and impact on wealth feels, at times, insensitive and perhaps even a little crass. Before we discuss financial markets, the thoughts of the whole of the Ascot Lloyd team are with all those affected by Russia’s invasion of Ukraine.

Nonetheless, as investors, our job is to try to assess the current situation and potential impacts on markets as dispassionately as we can. We are not robots, but emotions can get in the way of sound decision making.

Since the outbreak of war, the West has hit Russia and some of President Putin’s allies with a barrage of economic sanctions. The hope is that the economic pain inflicted on Russia will be severe and force Putin to either back down, or for a regime change to be instigated from within. However, there is a fine balancing act, as much of Europe depends on Russian oil and gas. Inflicting sanctions without inadvertently affecting the Russian energy sector is difficult.

Oil and Gas prices have soared

Indeed, there are clear signs that energy commodities have been affected. To date, there have been no disruptions to the flow of Russia's oil as some expected. Nonetheless, prices have risen dramatically, as non-energy sanctions have made it more difficult for Western customers to buy and sell Russia's oil. As a result, many are "self-sanctioning," i.e. avoiding buying Russia's oil, forcing it to discount and reroute to willing buyers. This adds cost and puts pressure on benchmark energy prices. The charts below show that Brent Crude oil has risen in price by 67% year to date and Gasoil by nearly 86%: 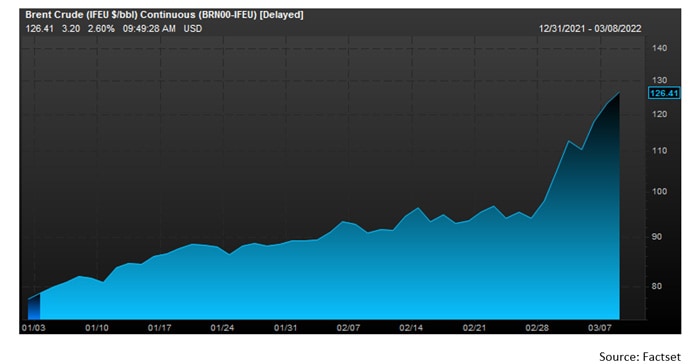 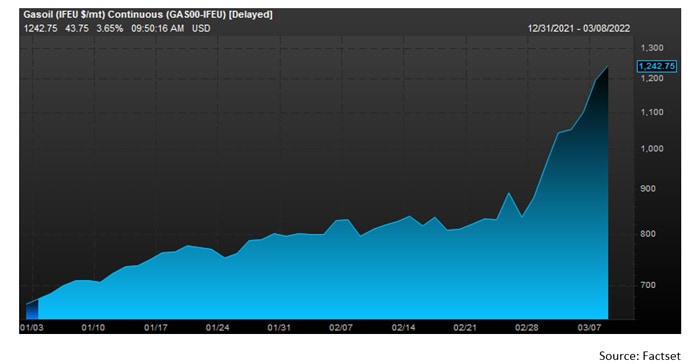 The sanctions levied by the U.S., EU, and the U.K. are intended to be highly punitive, without disrupting energy markets. But those goals are mutually exclusive. By cutting off many Russian banks from the global financial system, including the Swift messaging network, the sanctions have limited Russia's ability to receive payment for its exports, including crude oil. They have also made global businesses and financial institutions extremely reluctant to transact with Russia, even in ways not explicitly targeted. As a result, traders are finding it difficult to sell Russian crude, which now trades at a deep discount to global benchmarks.

Perhaps compounding the upward pressure on energy prices are the recent reports that the US is in talks about banning Russian oil imports altogether. According to the New York Times, momentum behind the proposal is growing after a bipartisan group of lawmakers agreed to progress legislation banning energy imports from the country. Press reports also indicate that European governments are divided over whether to join US, though Japan is reportedly in discussions about a ban on Russian oil.

In retaliation, Deputy Russian Prime Minister and Energy Minister Novak threatened to cut natural gas supplies to Europe via the Nord Stream 1 pipeline (Nord Stream 2 has been suspended). Novak said while no decision has been made, Russia had the right to take actions that mirrored Europe's sanctions on the country. Novak also warned a ban on Russian oil could send crude to $300 and noted Russia had other avenues for its crude.

When will Oil prices come down?

The spike in oil and gas prices has the market worried about the effects on economic growth. As energy prices rise and it costs significantly more to heat our homes and fill our vehicles, consumers have less spare cash and the propensity to spend is dramatically reduced. As we highlighted last time, energy is a large component in many inflation calculations and there is a distinct risk that the global economy, still not fully recovered from Covid symptoms, is dragged into a stagflationary environment. Stagflation is an environment of stagnant economic growth and high inflation.

A pertinent question then is when might energy prices start falling? Well, it is difficult to say as much depends on the duration of the conflict and what further measures are implemented by governments around the world. However, I fear that higher prices might be with us for some time to come.

To combat rising fuel prices, the International Energy Agency (IEA) pledged to release 60 million barrels of OECD reserves on March 1. But, as we have seen, this simply wasn’t enough to placate markets. The world consumes that much oil in about 14 hours and estimates suggest that the reserve draw will provide a buffer for just 15 days should Russian oil be disrupted at a peak of 4 million barrels per day. Further releases are possible, but OECD inventories were already at a seven-year low before the Ukraine crisis began, at 2.5 billion barrels (25 days of supply). It is possible that IEA members won’t be willing to let inventories fall much further. Therefore, upward pressure on prices may continue.

Clearly, the effect on global financial markets has been quite negative. Excluding Russian assets, European markets and the Euro have been the most affected given proximity to the conflict and Germany’s reliance on Russian gas.

Volatility (the amount by which prices rise and fall) has increased significantly as indicated in the chart below, which shows the VIX (a commonly used measure of the volatility in the US stock market) over the past 5 years:

Volatility is, rightly or wrongly, often equated to “risk” and the steep rise in the VIX has prompted a fairly typical “risk off” environment. This is one where equity markets are highly volatile with downward momentum and bonds benefit from a flight to safety resulting in rising prices. In short, in this type of environment, portfolio diversification across multiple asset types and geographies should come into it’s own.

More pronounced has been the effect on Russian financial markets. Readers may have seen the viral clip of a Russian trader who toasted the death of the Russian Stock Exchange live on air in a news interview. The sanctions imposed have made Russian securities effectively uninvestable and I am pleased to say that our portfolios had minimal exposure as we came into the crisis.

Over the past few days, global index providers have begun removing, or discussing removing Russia from their indices. MSCI have removed Russia from the widely followed MSCI Emerging Markets equity index, instead marking Russia as a standalone index with nil value. This effectively forces fund managers to write down their holdings to zero. Anecdotally, bond index providers are discussing following suit.

Where do we go from here?

It is natural for investors to question how much further markets could fall and when they might recover. Unfortunately, the future is unknowable. However, the following charts from our colleagues at BCA research suggest that the current market difficulties may be reasonably short lived: 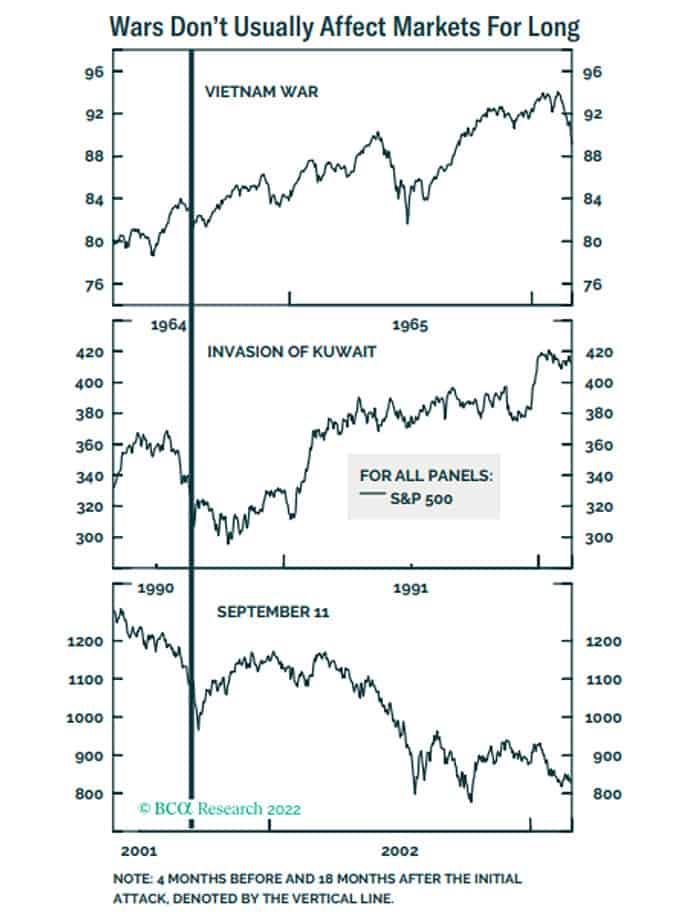 We can see that in 1964 and 1990 the S&P 500 was up 18 months after a major geopolitical event. The exception is 2001 where the market recovered initially but was then dragged down by a series of accounting scandals and the collapse of Enron.

So, providing the War doesn’t escalate from here, there is reason to believe that market will recover over the coming 18 months. Nonetheless, the immediate outlook is murky, to say the least. So, with apologies, I feel it prudent to reiterate the message from last time: