A rocky start to Q3

The start of the final quarter of 2021 has been ushered in by increased market volatility, causing sharp declines in most equity and bond markets.

There isn’t, as far we can tell, anything new to add to the list of market worries but the selling pressure at the beginning of this week has grabbed a lot of attention and column inches in the financial press.

As I have discussed before, there are several factors behind the latest market swoon, although much of the focus has been on the speed and magnitude of the rise in bond yields in the US and UK. Over the past few weeks, we have heard hawkish remarks from both the US Federal Reserve (Fed) and Bank of England (BOE). Perhaps the most notable for readers were comments from the BOE noting that the case for higher interest rates “appear to have strengthened” and that inflation would be over 4%, more than double its long-term target, at the end of the year. The price action in the UK government bond markets was large and immediate: 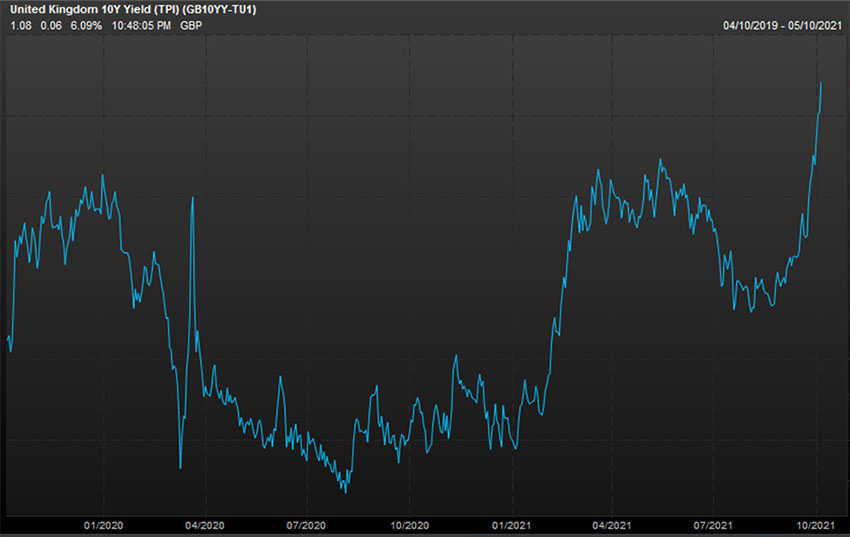 The above chart shows the yield on UK government bonds with 10 years to maturity and we can see that the recent move has been very sharp indeed, with the yield by far the highest it has been in over 2 years.

As markets rush to price in higher than expected, and potentially stickier than expected, inflation movements of this magnitude in the bond market had profound effects on other areas of the markets, particularly “growth” stocks.

As a reminder, “growth” companies (which tend to sit in the Technology and Internet sectors), are favoured by investors who are seeking long term earnings growth in the future. These can often be viewed as expensive and, sometimes, may not even be profitable (think Tesla 5 years ago) but investors are willing to pay up in the hope of outsized returns in the future.

If a “growth” company does turn a profit, a commonly used way of attempting to ascertain the intrinsic value of the business is to discount the expected future earnings back to their value in today’s money. This is known as a discounted cash flow model. One of the key variables in the calculation is the company’s cost of capital which is largely driven by medium to long term government bond yields. If bond yields rise, the company’s cost of capital goes up, making the future earnings worth less in today’s money. Therefore, share prices of high growth companies can be highly sensitive to movements in bond yields, especially as the latter have been so low for such a protracted period.

The chart below shows the fortunes of US “value” and “growth” companies over the past 12 months, relative to wider markets, and the effect over the past couple of weeks can be clearly seen: 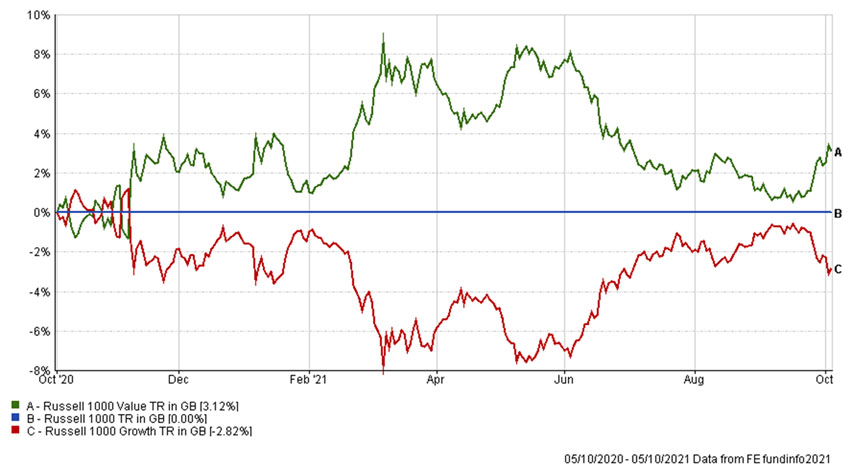 As the chart annotation suggests, the question for equity investors is how to position portfolios from a value vs growth, or, as I prefer to say, a cyclical vs defensive point of view. To be clear, this not only affects sector and industry positioning but also geographical allocations, as some countries stock markets are inherently more cyclical than others.

Whether the latest cyclical rally continues depends very much on the future direction of travel in bond yields. We do think that they will continue to drift upwards but are mindful that the aggressive movement may be overdone in the short-term.

What about bond markets?

Clearly, these movements also influence the wider bond markets, as shown below:

So, what can investors do? Well, we try to mitigate these periods of downside risk by being highly selective over the managers we choose in bonds, particularly sterling corporate and global corporate bonds. Our process aims to find those managers who have demonstrated the delivery of superior risk adjusted returns over the long term. We also, where possible, aim to employ fund managers who have flexibility over where they invest, in which securities and how much interest rate risks they run. In theory, skilled managers with flexible mandates should be able to protect on the downside, rather than simply tracking the index.

Seemingly synchronised movements in equity and bond markets are a worry for asset allocators as they raise a question of whether traditional portfolio construction techniques really work. Our long-term strategic asset allocations are developed using sophisticated modelling techniques using vast amounts of market data, including how various asset behave relative to each other (i.e. their correlation to one another). However, the process doesn’t simply rely on a mathematical “black box” as there is a qualitative, common sense, overlay to the process as well.

All the empirical evidence from this work suggests that diversifying portfolios across cash, bonds, equities and property, does help improve risk adjusted returns over the long term. Yes, there are short periods where the correlation of equity and bonds moves higher (they start to behave the same way) but these tend to be relatively short lived.

US debt ceiling – a quick update

The debt-ceiling standoff is still seemingly far from a resolution. If you remember, the US Treasury is currently using "extraordinary measures" to pay the country's bills, and Treasury Secretary Yellen warned those will be exhausted by 18th October, less than two weeks away.

Democrats are putting another bill up for a vote on the day of writing, Wednesday 6th October, to extend the limit out to December 2022. As I write, this is expected to be blocked by the Senate Republicans, who argue raising the ceiling should be majority party's responsibility. President Biden yesterday underscored the seriousness of the matter, calling it a "meteor headed to crash into our economy". But Senate Minority Leader McConnell shows no signs of folding. As I mentioned last time, this one is going right down to the wire.

So much uncertainty, what to do?

Here comes my broken record! In today’s heavily regulated world where investor focus has been narrowed from 3 – 5 years down to 1 or 2 quarters, it is all too tempting to get sucked into day-to-day or week-to-week markets movements.

Investing is for the long-term and investment strategies, in our view, should be constructed as such. We are in a highly uncertain period and, at time like these, we feel it best to trust in long standing, proven asset allocation and diversification techniques.

Equally, as I have said before, if you have a long-term financial plan, it is often best to stick to it rather than be swayed by short term market idiosyncrasies. Whilst it is cliché, time in the markets is usually better than timing the markets.