Living on the edge

The subject at hand in this update is debt, both that of Governments and companies.

Last time I briefly discussed the US debt ceiling, which I will talk about later. For the past 2 weeks, however, global financial markets have been worrying about company debt. Specifically, the Chinese property development company, Evergrande.

But why should the debt of one Chinese company impact financial markets around the world? Well, it is the sheer scale of the debt burden carried by Evergrande that has investors worried, together with the potential contagion effect that this could have on other companies.

Could history repeat itself?

Before we get into specifics, it is worth reminding ourselves that the Global Financial Crisis (GFC) in 2007/8 was caused by debt. Much like the situation with Evergrande, the GFC was caused by debt taken out against property in the US. As banks became ever more willing to lend substantial sums to households who, by all accounts, simply couldn’t afford to repay their debt, they were essentially taking a massive leveraged bet on the US housing market. At the time, most people believed that US house prices could only go up and that investing in property was as safe as houses (excuse the pun). Of course, we all now know that this simply isn’t the case.

When the US housing bubble burst, lenders struggled to recoup the interest payments on the loans that they had made, and losses had to been taken. Exacerbating the problem was the fact that investment bankers had found a way of making yet more money from these bad loans by packing them into complicated bundles of debt called Collateralised Debt Obligations (CDO’s).

The rating agencies, whose job it is to assess the safety of bonds (i.e. how credit worthy is the borrower and how likely is the lender to get their money back), had difficulty in understanding CDOs, or rating them correctly. As such, many were rated AAA and AA, the “safest” ratings.

As the underlying loans in the CDOs went bad, investors couldn’t tell who had exposure, due to the complex structures they had been packaged into. Some large investment banks had many times more exposure, and risk, than they thought, and the banking system essentially froze. Without access to fresh capital the banks struggled, culminating in the collapse of Bear Sterns and latterly Lehman Brothers. Market reaction was severe, and the world entered the deepest recession in a generation.

The situation with Evergrande has some similarities but also some very important differences. But who are Evergrande? In short, they are a Chinese property development giant with over $300 billion of debt on their balance sheet. Much of this in issued in Yuan but some $19 billion is in US Dollars, making it easier for investors outside of China to buy.

On Thursday 23rd September (I am writing this on Wednesday 22nd), Evergrande need to pay an interest payment of $83.5 million on one bond (read debt) issue. They have a further $42.5 million to pay on 29th September on another. These are massive liabilities, even for such a big company.

The company faces a cash crunch as the Chinese government cracks down on irresponsible lending and over indebtedness of big companies. This has led to serious doubt as to whether Evergrande will be able to find the cash to repay the interest over the coming week.

But why does this matter? Well, Evergrande debt is held by institutions and funds all over the world and they could be facing large losses should the company default on their loan obligations. Not only that, the company is one of the largest players in a heavily leveraged real estate sector, which accounts for 28% of China’s economy, according to the Financial Times. A major default by Evergrande could not only affect investors holding their debt but could also have ripple out effects to the Chinese economy as faith is lost in the real estate sector.

If the Chinese property sector falls over then the economy contracts which has far reaching implications on the global economy, commodities, industrial companies and banks, to name but a few.

Clearly the market is concerned, evidenced by steep losses around the World on Monday. However, we don’t believe that the world is facing another Lehman moment or, by extension, another financial crisis (at least not from Evergrande).

Currently there is little evidence that the contagion risk from a potential default is anywhere near as deep and far reaching as from the US housing bubble. We think that the Chinese government will step in to prop up Evergrande as they continue to champion social, economic and market stability. Put simply, a disorderly default by Evergrande and wide-reaching market fallout would be too embarrassing for the Xi administration. There are some indications that they are already stepping in as they have injected more liquidity (cash) into their banking system than usual over the past week or so.

These liquidity injections have helped to buoy market sentiment and last night (Tuesday) Bloomberg reported that Evergrande had announced that the interest payment had been “resolved” with bond holders in private negotiations. However, the story also noted that questions remain over the amount of interest that will be paid as well as the date of payment, neither of which were specified in the announcement. This has triggered speculation among some analysts that Evergrande struck a deal with bond holders to postpone interest payments without having to label the move a default.

This certainly looks like it will go down to the wire and Evergrande are most definitely living on the edge.

The US debt ceiling

Another institution living on the edge is the US Government. We touched on the US debt ceiling last time and negotiations on raising the debt limit look like they will, again, go into the 59th minute of the 11th hour.

This issue comes around every few years. Each time, brinkmanship and political interests result in market wobbles but then, eventually, a deal being done. However, back in August 2011, the political wrangling led to the ratings agencies deeming the US less creditworthy and stripping it of its coveted AAA status. As the following charts shows, markets did not react well: 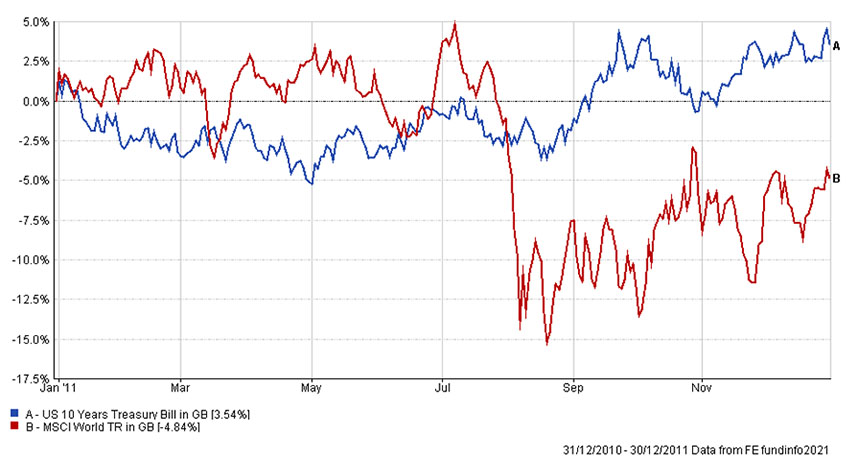 The Democrats have a razor thin majority in the Senate and their passing of a bill containing both a $3.5 trillion social spending package and a raise to the debt ceiling appears ambitious. Last night, Reuters reported that a new democratic bill to fund the Government to the 3rd December and suspend the debt ceiling (i.e. ignore it) until the end of next year had secured enough votes to pass the House of Representatives. The bill now heads to the Senate where Republicans have vowed to block it.

So, we could be looking at another shutdown. What is more worrying is the nightmare scenario of the Senate sleepwalking into the crisis and becoming unable to repay the interest on its debt. This would be a self-imposed cash crunch, leading to a default (a bit like Evergrande) and markets would not take kindly to that.

The value US treasury market, that is the government bonds in issues today, is estimated to be $46 trillion. Not only that, US Treasury are deemed to be almost risk free and the prices of hundreds of trillions of assets are based on the prevailing value of US Treasury bonds. The US has never defaulted on its debt before and, if it were to do so, the value of Treasuries would fall precipitously, bringing virtually everything else with them.

US Treasury Secretary and former Chair of the Federal Reserve, Janet Yellen, sent a stark warning to congress on the matter:

"We would emerge from this crisis a permanently weaker nation," Yellen said, noting that U.S. creditworthiness has been a strategic advantage.

"We can borrow more cheaply than almost any other country, and defaulting would jeopardize this enviable fiscal position. It would also make America a more expensive place to live, as the higher cost of borrowing would fall on consumers," Yellen wrote. "Mortgage payments, car loans, credit card bills - everything that is purchased with credit would be costlier after default."

"This led to financial-market disruptions that persisted for months. Time is money here, potentially billions of dollars. Neither delay nor default is tolerable."

Now, we don’t think that the Senate will simply allow a default to happen. To do so would be incredible, to say the least, and akin to shooting their own foot off. On purpose.

For now, it feels like markets have paused for breath while climbing the wall of worry. Let’s hope that they don’t fall (or get pushed) off.