The stark realities of intergenerational wealth

Older generations who have been fortunate enough to accumulate wealth need to think about the implications of passing that on. Younger generations, meanwhile, must engage earlier. 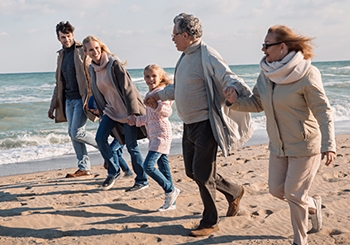 Generational disparities in wealth accumulation are increasingly stark. People born in the 1980s, currently in their 30s, have about 20 per cent less wealth on average than those born in the 1970s had at the same age, according to the IFS, noting a clear break from a pattern of "sizeable" generation-on-generation increases in wealth stretching way back to the 1930s.

The baby boomer generation has benefitted from a trio of favourable economic circumstances which do not grace millennials or Gen Zers: rapidly rising property prices, long periods of market growth from a low base (bolstering generous final salary pensions), and high incentives to save.

Meanwhile, the younger generation are struggling to get on the property ladder. IFS figures show more than half of 25-to-34-year-olds owned a home in 1996, but by 2017 it had fallen to little more than a third. Few are saving anything substantial and a third of millennials are not investing in a pension despite the introduction of auto enrolment, according to Profile Pensions.

“Inflation has meant £100 in 1977 is £650 now, but house prices have increased by far more than 6.5 times,” says Graham Bentley, Chair of the Ascot Lloyd Investment Committee. “People were buying houses for £15,000 in the 1970s and 1980s; now the average price is a quarter of a million. This means the scale of deposit you need to save to buy a property, both in proportion of your income and sheer size, is much higher, and there are also no longer any 100% mortgages.

“People starting to pay into pensions in the 1970s, meanwhile, invested at historic market lows; now it’s the opposite. And in the early 1980s, when we had very high inflation and interest rates, all securities (bonds and equities) were valued relative to the risk-free rate. How markets have done since then, and inflation plunging from 20% to near zero, has seen all securities re-rated.

“Finally, the boomers were motivated to save because they were getting 10% interest on deposits at the bank. Interest rates are now so low that the younger generation aren’t incentivised to save. In 1982 people saved, on average, just short of 15% of their excess income. Now it’s close to 3%.”

The Bank of Mum and Dad has been increasingly active for some years now. An English Housing Survey found the proportion of first-time buyers who report receiving direct contributions from family toward a deposit increased from 22% to 29% between 1996 and 2016.

The younger generation not only saw their wages bounce back far slower from the 2008 global financial crisis than older workers, according to the Resolution Foundation, and even now are still feeling its legacy of low earnings growth and more muted asset returns, but they are also more likely to have been financially affected by Covid, leaving more parents to step in to help.

Baby boomers and Gen Xers in the UK have handed over £8.2 billion to family since the start of the pandemic, according to a study by OneFamily. One in four over-50s have supported family members through the crisis financially, lending an average of £1,300 each, a 44 per cent uplift on the previous year. More than half of parents and grandparents raided their savings to do so.

“I've seen, just among my own clients, quite a large shift of wealth down to children throughout the pandemic,” says Helen Richardson, an Independent Financial Adviser at Ascot Lloyd. “A lot have children who have been made redundant or have businesses that have been affected. One had to send chunks of his savings to his son's family so they could pay their mortgage.”

For others, the topic of passing wealth down the family has come to the fore as some people, having slowed down and taken time to reflect during the pandemic, are planning to retire sooner than they previously expected, and want to ensure assets pass on in the most tax efficient way.

With so much money at stake, this is one of the most important times when somebody should engage with a financial adviser. Ascot Lloyd’s Independent Financial Advisers not only help clients find the most tax efficient way of passing wealth down the family, but also support them in calculating and understanding how much they will need to keep, to fund the lifestyle they want.

“We consider the individual client’s needs because at the end of the day their primary concern has to be; can they afford to retain their lifestyle and achieve their own aspirations for the remainder of their life?” says Helen Richardson. “So firstly, we do a lot of work in understanding affordability by using cash flow modelling and risk assessments. Once we’ve identified how much can be passed on, we look at the most efficient mechanisms for doing so.”

However, it is equally important to engage younger people in financial advice, not least as they are less likely to enjoy as comfortable a retirement as their parents’ generation. While the older generation might hold the wealth, Ascot Lloyd actively tries to get children and even grandchildren involved in discussions. This is even more important if the children are wealthy in their own right because inheriting assets might exacerbate an existing problem for grandchildren by increasing an existing Inheritance Tax liability.

Inheritance aside, it is vital that younger people, in general, are thinking about finances more. It is incumbent on not only the financial advice industry but government, schools and parents to educate millennials and Gen Zers earlier on, giving them the best possible chance of amassing enough wealth to see them through retirement. All the signs are that they won’t have the luck the boomer generation, in some cases, had, to stumble their way to comfortable retirement without good advice.

“What we've seen over the past 50 years has been extraordinary, but it's going to be very different now and that means financial advice will be more important than ever,” says Graham Bentley. “Today's retirement generation should be sitting with a financial advisor to see how they can transfer their wealth as effectively and efficiently as possible. But they should also encourage their children to engage as soon as they're old enough to understand the process of wealth.”

If you or your loved ones require any financial planning support, please contact your Ascot Lloyd Independent Financial Adviser; they would be happy to help and will gladly involve family members in meetings where you wish them to do so.

Alternatively, please complete the form below and a member of our team will be in touch.

Find out more about how we work with you.