NASDAQ index now in negative territory for the year

Over recent weeks and months I have been discussing the potential for a “taper tantrum” and resulting pressure on equities, particularly higher growth technology stocks.

Since I last wrote to you, these events have continued to play out with the technology heavy NASDAQ index now in negative territory for the year, in Sterling terms at time of writing: 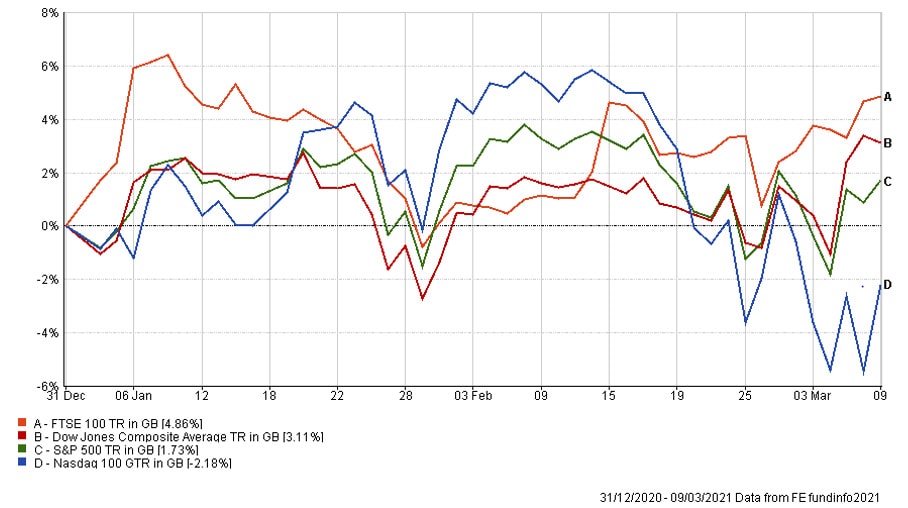 On the other hand, indices more exposed to economically sensitive, or cyclical, companies have fared slightly better which continues to benefit the UK at the margin.

Arguably then, we have witnessed, or are witnessing a taper tantrum, like in 2013. However, there is one clear and important difference. This event has not been caused (that we can see) by any communication misstep from Central Banks. Instead, financial markets have seemingly talked themselves into believing that inflation will increase at such a rate as to force Central Banks, particularly the US Federal Reserve, to raise interest rates sooner than expected.

This can be seen in the following chart which shows that as recently as the 31st December 2020, market expectations were for the first interest rate rise in the US to be sometime early in the 2nd half of 2023. Now, a mere six weeks later, expectations have been brought all the way forward to the second half of next year: 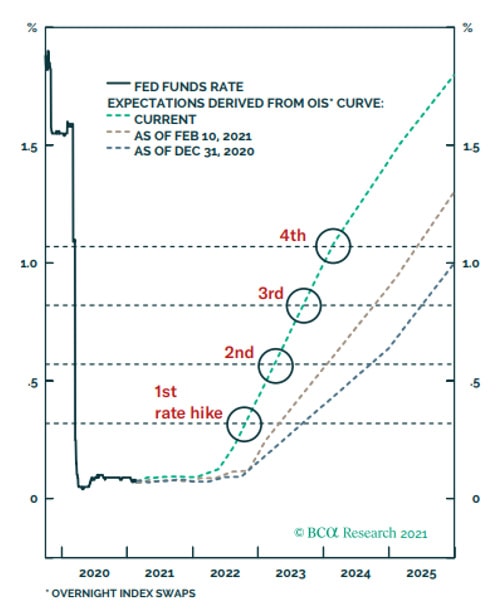 Has the market fear of inflation become irrational?

So, has the market fear of inflation become irrational? Well, no. As I have discussed before, the monetary and fiscal stimulus in the face of the pandemic has been nothing short of staggering, as shown below, and logic would dictate that all this cheap money should find its way into the real economy as vaccination programmes progress, thus pushing up the prices of goods and services. President Biden’s $1.9 trillion support package for Americans has now been passed, reinforcing this view. 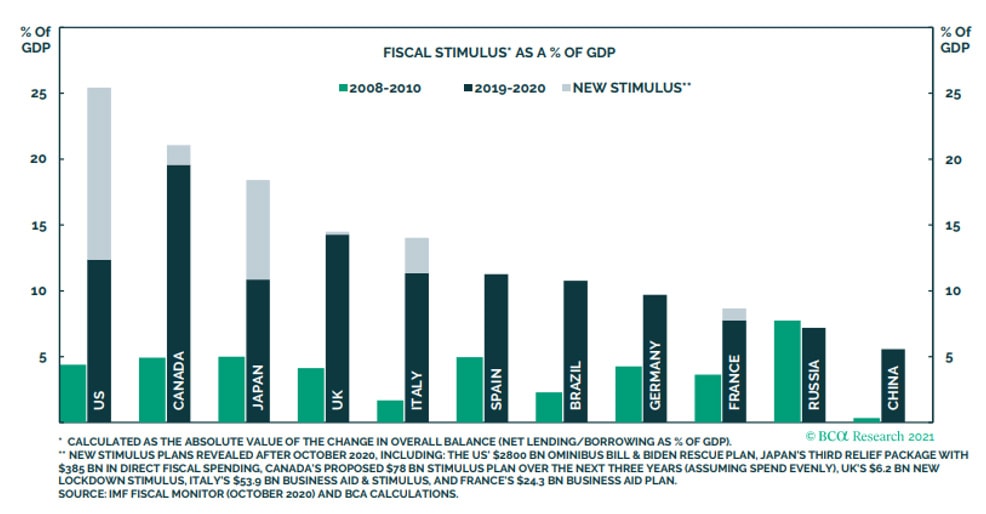 However, we need to bear in mind that it is not unusual for borrowing rates to spike shortly after an economic expansion has begun, as bond markets reflect the better prospects for growth. The chart below shows eight episodes since 1990 of a sharp rise in the 10-year US Treasury yield. On every occasion (except in 1993-4, when the Fed unexpectedly raised rates in February 1994), equities performed strongly while rates were rising: 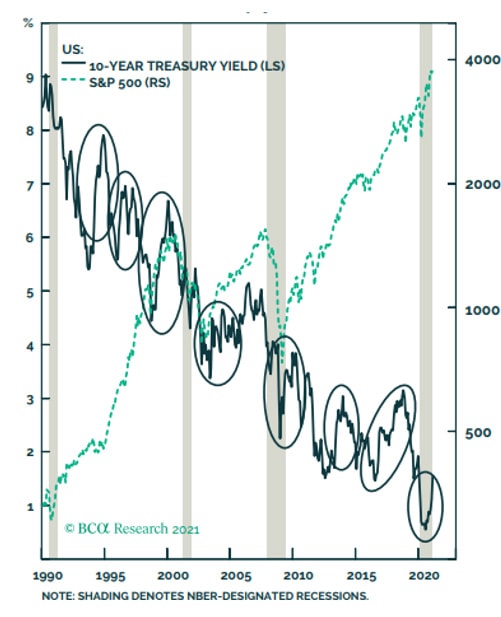 Inflation fears could continue to spook the markets

The big risk to markets then is that the Federal Reserve makes a policy error and unexpectedly raise rates early, as in 1994. We think this unlikely. Fed Chair Jay Powell has been adamant in recent speeches that tightening of policy is not on the cards since, as he testified to Congress in late February, “the economic recovery remains uneven and far from complete, and the path ahead is highly uncertain”. The Fed has particularly emphasised that the labour market remains weak – with broad measures of employment still at typical recession levels, particularly for black and Hispanic workers. In fact, in stark contrast to market expectations shown above, the FOMC “dot plot” (committee members expectations of interest rate rises) does not project a hike in US rates until 2024.

As I have discussed before, a combination of the weak dollar, rising oil prices, a likely jump in services prices when consumers start to travel and eat out again, and the easy year-on-year comparison, mean that reported inflation will inevitably be higher. But the Fed has clearly signalled that it believes these are temporary factors that will not push it towards tighter monetary policy.

Nonetheless, inflation fears could continue to spook the markets over the coming weeks and months. As ever, we continue to advocate proper diversification across and within asset types. This includes exposures to both “growth” and cyclical stocks in case our central outlook turns out to be incorrect.