Are the markets in a bubble?

The well reported saga of Gamestop in late January and signs of excessive risk taking on behalf of retail investors has led to many clients asking whether markets are in a bubble and, more importantly, what risks this might pose to portfolios.

As a brief reminder, a group of day traders clubbed together via social media (mainly Reddit) and bought stocks which were being bet against by hedge funds. The main company of focus was Gamestop but others such as AMC were also driven up into a short-term bubble. In the case of Gamestop, the price movement has been nothing short of extraordinary: 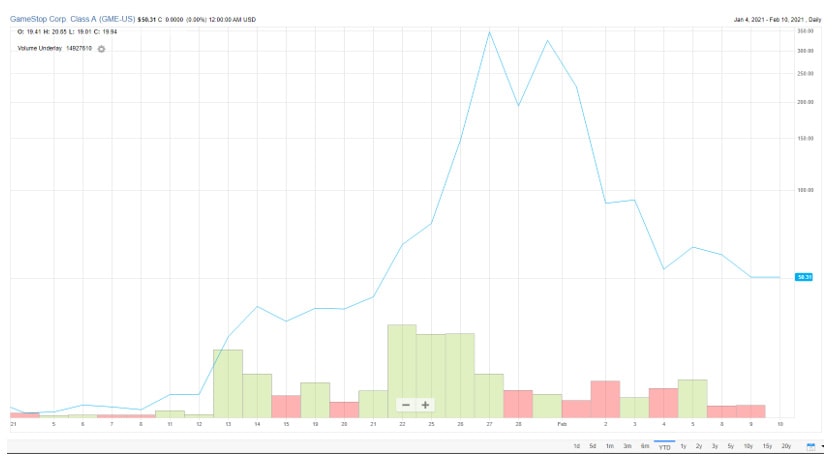 But what has driven this and why now?

Well, most believe that it is simply a result of huge amounts of excess cash in both financial markets and the pockets of consumers, due to massive monetary and fiscal easing in the face of the global pandemic. In the US alone, it is estimate that consumers are sitting on a combined $1.5 trillion of savings: 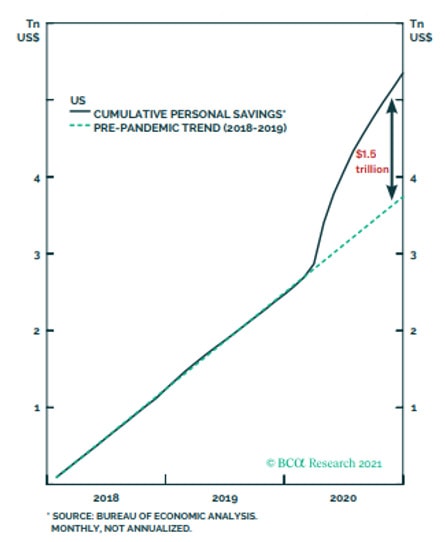 This, combined with the ability to trade complex instruments for free via apps such a Robinhood, has increased propensity for excessive risk taking on behalf of retail investors. This “bubbly” behaviour has extended into other areas of the market such as Silver, Bitcoin and Lithium prices.

So, are we now in a bone fide bubble? Well, we don’t really know but excessive risk taking, or mania, is one of the signs that we may be entering bubble territory. So, if that is the case…

What are the risks to wider financial markets?

So far there are no signs of systemic risk from the hedge funds that got on the wrong side of the retail investors. Overall, global equities are up only moderately year-to-date, and so we would argue that there is no generalized bubble (at least, not yet). And, while day traders might be hyped up, longer term retail investors are not as over-optimistic about the outlook as they were at the end of 2020 – in the latest AAII survey, the same percentage of investors said they expect the market to rise over the next six months as expect it to fall. This is demonstrated in the following chart in which the sentiment of individual investors is shown to have fallen significantly from its recent peak: 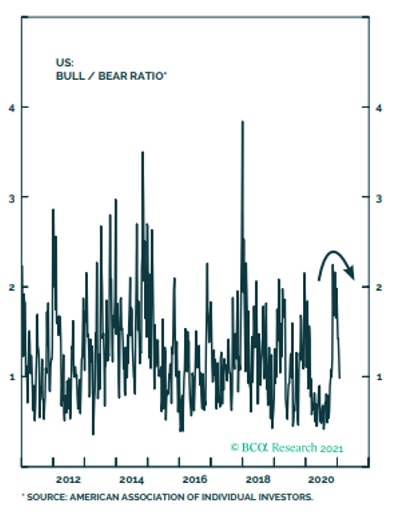 Nonetheless, the developments have caused concerns amongst more conservative and professional investors which could trigger a correction. This would not be out of the ordinary at this stage in market cycle and after such a strong bull-run, since mid-March last year.

Our reaction to these circumstances

At this point I’m afraid I am going to bring out my broken record again. We encourage investors to take a long term (5 years +) view on their investments and ensure that portfolios are well diversified to give them the best chance of weathering any potential storms. Attempting to time the markets is futile and often destructive to the value of your wealth.

If we are in the foothills of a bubble in equity markets, what do we do about it? Well, for now, the path of least resistance for markets appears to be higher. As I have written before, the global vaccination programme is progressing quite well, and it appears likely that enough people in developed nations will have been vaccinated by mid-year to allow a return to more normal consumer behaviour in the second half of 2021: 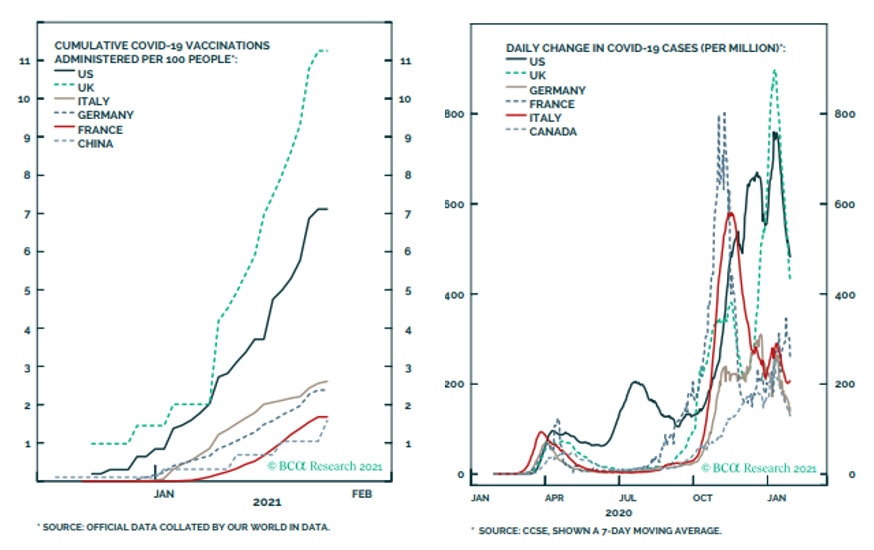 It would also appear that new cases are peaking, or have peaked, in most countries. However, the continual emergence of new strains (the Bristol variant being the latest in the UK) clearly poses a risk to this view.

These positive trends should pave the way to a marked increase in economic growth in the second half of the year and the excess liquidity (cash) in the system should provide support to current, elevated, equity prices.

It is also worth pointing out that bubbles do not burst themselves. More often than not, bubbles are burst through the actions of central banks. As I wrote last week, our view is that central banks are not in any hurry to raise interest rates any time soon.

So, whilst it may feel uncomfortable, the best thing to do at times like these is often nothing. Instead, our experience has shown us, that it is prudent to rely on appropriate asset allocation and expert fund selection in order to generate attractive, long-term, returns in line with your risk appetite.