Steven Lloyd explores the question "what is the outlook for inflation and what this might mean for portfolios?

Companies’ reporting of Q4 2020 earnings is well underway in the US and, for most, the news has been positive. We should, however, bear in mind that analyst’s expectations were rather gloomy and, without guidance from many companies, perhaps little more than guesswork.

Of note was Microsoft’s report that the company delivered revenue growth of 17% versus the same period in 2019, a total of $40.8 billion. Quite a staggering number for just three months of revenue. This confirms the market’s preference for big technology companies last year as investors swarmed into companies who should have been able to grow their revenue as many areas of the World went into lockdown.

As I have written previously, the “stay at home” trade rapidly rotated into more cyclical areas of the market on the expectation of economies reopening. The emergence of virulent new strains of the virus, strict lockdowns and yet more grim milestones mean that the rotation has reversed over the very short term. The message, as ever, is to ensure adequate diversification of your portfolios.

A question that many clients have been asking is “what is the outlook for inflation and what this might mean for portfolios?”.

I should first point out that inflation is not necessarily bad news for equities. It only becomes a problem (historically speaking) when it triggers central banks into raising interest rates, thus tightening monetary policy. Perhaps I should qualify that statement by noting that equity markets attempt to discount the future, and so should investors believe that central banks will raise rates, equities could come under pressure.

A good example of this was in May of 2013. The then Chair of the Federal Reserve, Ben Bernanke, stated that the US central bank was seeking to start tapering it’s purchases of government bonds. This would have reduced liquidity in markets and tightened policy at the margin. What ensued was a rapid sell-off in both bonds and equities, now referred to as the “taper tantrum”: 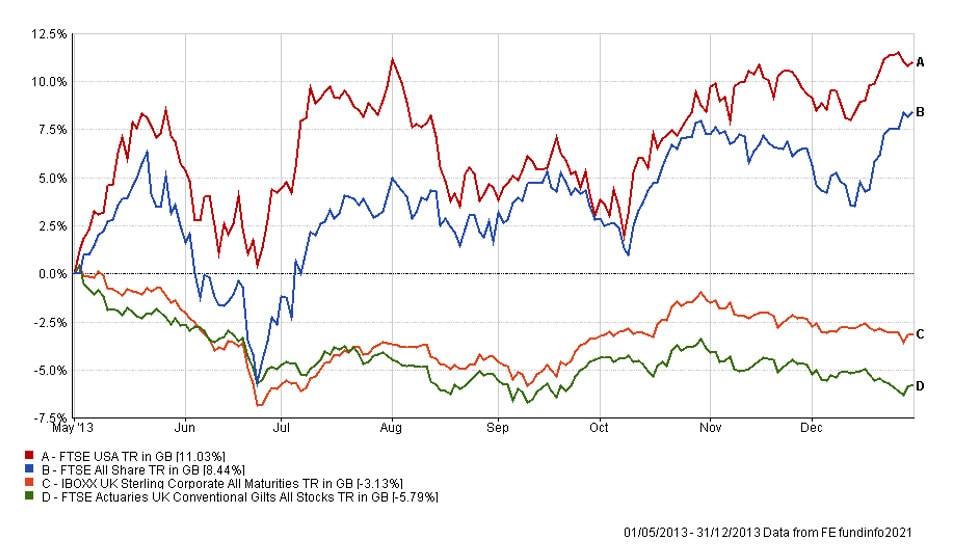 Clearly, markets recovered but only after reassurances from Bernanke that the conditions for tightening monetary policy were not yet in place.

Most commentators would agree that financial markets are now “hooked” on the unconventional monetary policy which has been in place since the Global Financial Crisis, i.e. quantitative easing, and now the large fiscal packages of support that central banks have rolled out since the beginning of the pandemic. Does this mean that there is a risk of another taper tantrum? Frankly, yes, there is.

Having interviewed numerous fund managers throughout January, who manage both equity and bond funds, the risk of communication error and another episode similar that that we experienced nearly 8 years ago is a question we have asked of all of them. Interestingly all agreed that whilst this is a risk that should not be ignored, it is not their base case (read best guess).

Everyone we have asked (and I must say that I agree) believes that central banks have learned from the events of 2013 and will be very keen not to repeat them.  If we think through the implications of such an event, then we can see that it is in their best interests to appease financial markets. Should bond yields rise too quickly (causing prices to fall) this would translate into higher borrowing costs on everything from business loans to credit cards and mortgages. A greater percentage of the US economy than at any point since the Global Financial Crisis is now on the life support of artificially low borrowing rates and simply could not survive if the interest payable on their loans rose too high. Therefore, by allowing bond yields to rise too high and too fast, central banks risk wiping out a large proportion of their economy and putting a halt to the nascent recovery from the pandemic. Clearly this is not palatable for anyone.

A rise in inflation this year is inevitable because of the insistence of comparing prices to the year before in calculations, known as base effect. You may remember that oil price fell precipitously in March of last year. Oil prices, having recovered from around $20 per barrel to around $50 per barrel, will cause a spike in inflation in March/April of this year. However, bearing in mind my comments above, central banks will almost certainly look through this as a temporary spike due to base effects.

Therefore, we need to look at inflation expectations which have been anchored at low levels for a little over a decade now. The Fed is doing all it can to raise inflation expectations, notably through its recent change in policy framework. It has said, very clearly, that it will allow inflation in the US to overshoot the old 2% target for some time without tightening monetary policy. The following chart from BCA Research shows that US inflation has consistently been a long way short of 2%: 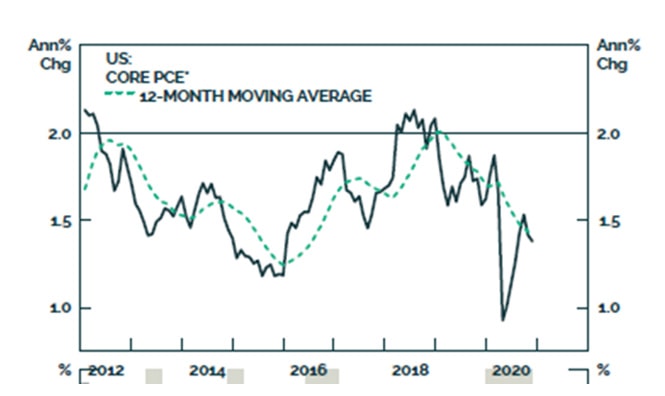 This means that the economy will need to run “hot” with higher inflation for quite some time in order to bring the 12-month average (the dotted green line) above 2%. In that case, if inflation only causes a problem for equities when it triggers tighter policy, then this is, perhaps, not a worry for a few years yet.

Of course, there are risks to this view, the consensus amongst market participants being one. Clearly there is a risk that the massive monetary and fiscal easing could combine with a stronger than expected economic recovery, causing inflation expectations to become unanchored. Excess liquidity and household savings could feasibly cause enough inflation to force the hand of central banks.

For now, we think that this is unlikely but are watchful for signs of danger. The unwinding of quantitative easing is, we think, the proverbial can being kicked down the road.