It would be customary for me to wish you all a Happy New Year although I suspect that 2021 has not had a happy start for many.

The past month has been eventful, to say the least, and whilst many countries are struggling with new, more transmissible, mutations of the virus which causes Covid-19, there are also a few reasons to be optimistic on the outlook for financial market in 2021.

Evidence is clear the UK, the US and South Africa are all having to increase efforts in their respective battles against our collective unseen enemy. New restrictions on movement bring discontent but we are optimistic that, here in the UK, a huge effort is underway to vaccinate the most vulnerable of the population.

We now have three approved vaccines in the UK and are at the forefront of rolling out vaccinations amongst developed nations. The following chart shows the confirmed number of vaccine orders per individual in the green bars and the vertical line shows the number of doses required to vaccinate the entire population: 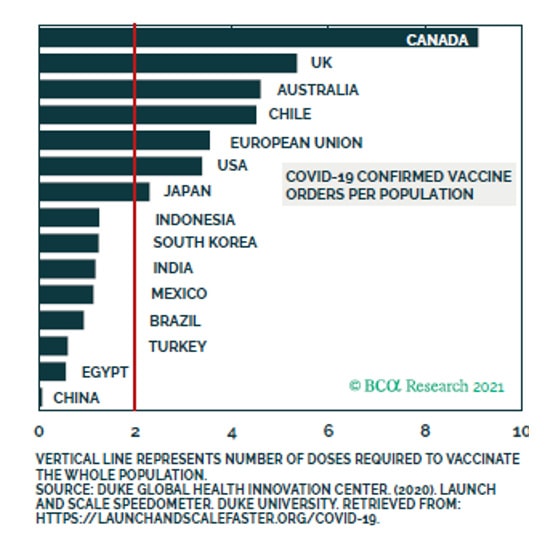 This would suggest that the UK has already ordered sufficient numbers to administer the required two doses to every individual living in the UK, plus some to spare. So, whilst the next few weeks will undoubtedly be difficult, the above should give us reason to be optimistic for the second half of the year.

Staying with the UK for now, we have (finally) agreed a trade deal with the European union, which came into effect on 1st January. I won’t go into the minutiae of the agreement here, but it is safe to say that the markets have taken it reasonable positively, for now.

One area lacking in detail is how financial services can be delivered from the UK into Europe, and some large parts of the currency and derivative trading business that used to be carried out in London has already relocated. The long-term impact on the sector remains to be seen. Given the financial services account for about 7% of the economy, we are hopeful that it will be positive.

Across the pond, events have been tumultuous and we have seen worrying levels of civil unrest. Readers will no doubt be aware that the Democratic party is making moves against Donald Trump in order to either remove him from office (unlikely) or impeach him so that he is ineligible to run for office again in 2024. This is certainly possible and, by the time you are reading this, the votes in the Senate will have taken place. Whatever the outcome, there is a danger of demonstrations spilling over into violence on the 20th January, inauguration day.

Financial markets have largely ignored the unrest which appears odd at first. However, despite elevated valuations in many areas of the equity markets, they have good reasons to be optimistic.

The Georgia run offs last week meant that the Democrats now control the House and the Senate (albeit by a razor thin margin). This “Blue Wave” means that the market is optimistic that the US treasury will now be more able to undertake a new, bigger programme of fiscal support (putting money in the pockets of consumers).

The size of the fiscal easing in 2020 gave economies much needed support in the wake of the pandemic. However, if measures are not extended this year, the positive fiscal “thrust” will turn into a negative “drag” on economic growth for 2021 and 2022:

The expectation of greater economic support in the US combined with extremely loose monetary conditions and the expectation of strong economic growth, as economies roll out vaccines and emerge from lockdowns, make for a potent cocktail of positive drivers for equities. We believe this is why markets have largely ignored the volatile political situation in the US.

This renewed optimism means that the sharp rotation in market leadership has continued. Previously unloved sectors which are highly sensitive to economic growth such as miners, oil & gas and financials have all led the way since early November. This has been at the expense of the incumbent market darlings, namely big tech.

The clear short-term beneficiary has been the UK which is highly weighted toward these industries and was looking attractively valued. Combined with Brexit relief/optimism, these effects have led the UK equity market to outperform other regions, particularly the US, over the past 3 months.

As I have discussed before, whether this rotation signals the beginning of sustained outperformance of these cyclical sectors remains to be seen. There are a huge number of variables in play and so, as regular readers know, we prefer to ensure that client portfolios are well diversified in order to “hedge” potential market rotations.

Finally, I would like to briefly discuss movements in the bond markets. Market optimism over vaccines and, subsequently, economic growth mean that bond yields have risen fairly sharply over the past few months. As a reminder, the price movements of bonds are inversely related to the yield movements. That is to say that, when bond yields go up, their price goes down and vice versa.

The chart below shows the income yields of UK Government Bonds (Gilts) in issue:

Over the past month, the yield on Gilts with 10 years until maturity has risen from around 0.19% to 0.32% at the time of writing. This doesn’t sound like a lot but it is a big move for bonds and has a negative knock-on effect on other types of bonds, such as corporate or high yield bonds.

So, does this spell the end of the bond bull market? Well, we don’t know but we don’t think so. In fact, we believe that this may represent some value in some types of bonds. In any case, we continue to value bonds for their diversifying properties at times market stress and advocate their use as part of a well-constructed, risk targeted portfolio.

In summary then, 2021 has got off to an eventful and “interesting” start. However, we are optimistic for financial markets over the course of the year given the support provided by central banks around the world. Markets seem to be hooked on central bank support and where this all ends, we just don’t know. However, for the time being, we will not be fighting the Fed.