President Trump has finally acknowledged that the transition of power in the US must begin and financial markets have reacted well.

On Tuesday, the removal of some of the election uncertainty buoyed US markets and the Dow Jones broke 30,000 for the first time. Interestingly, President Trump was quick to take credit for the stock market’s latest record, despite the fact that markets likely rallied on greater confidence that President Elect Joe Biden will be allowed to put his transition in place.

Users of Trump’s favourite communication medium, Twitter, were quick to point out that he feverishly pursued credit for the stock market rally in late 2016, from the date that he was elected. It seems hypocritical then to claim that the moves this week are as a result of anything to do with his administration.

Whilst history never repeats itself, it does rhyme (to paraphrase Mark Twain). The market movements over the past few weeks do resemble those in late 2016. As I mentioned in my last note, we have seen an aggressive change in leadership of equity markets, with economically sensitive stocks outperforming the large technology companies, which we also saw back in 2016: 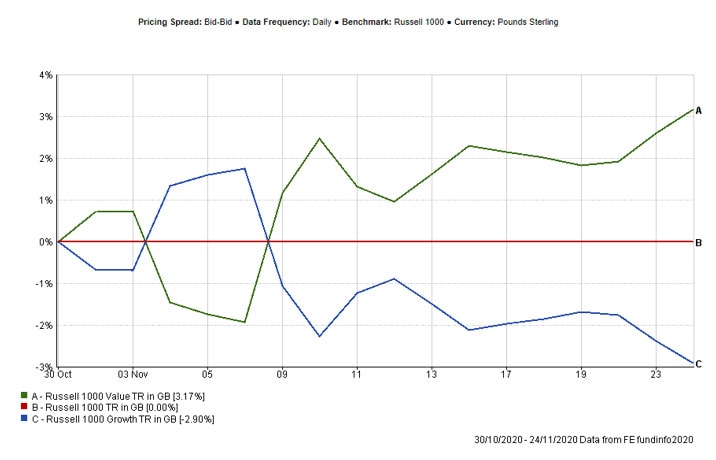 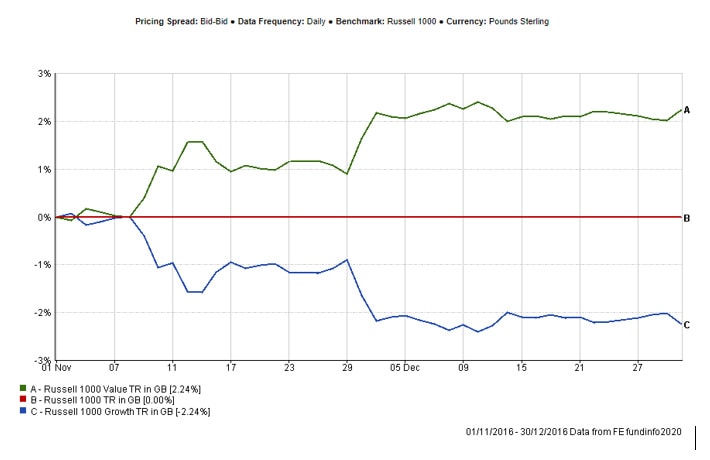 However, the drivers of the “value” rally may be different this time around. Specifically, I am referring to the recent positive news from Pfizer/BioNtech, Moderna and Astrazeneca/Oxford on a Covid-19 vaccine.

The question on the minds of investors is whether this signals the beginning of a sustained period of meaningful outperformance of value of growth. We have discussed a few times that the performance differential between the two styles is the widest it has ever been and has been sustained since the Global Financial Crisis.

If we extend the chart from the 2016 US election, we can see that the momentum in the performance of value stocks faded in March/April 2017 and growth continued its march higher: 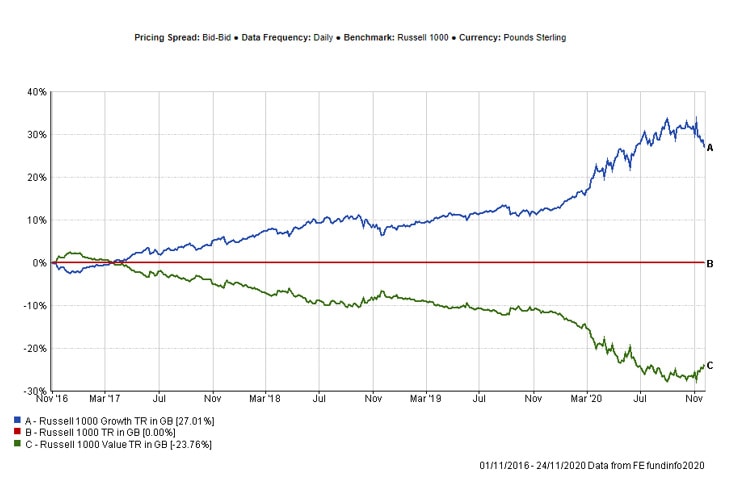 Will this time be different? As ever, I’m afraid we just don’t know. However, we can make some observations which may help.

The main observation is the relationship between interest rates and the performance of value stocks. Since the Global Financial Crisis, interest rates across developed markets have been kept at all-time lows in order to try and keep the economic recovery on track. Central banks are also trying to ward off deflation and raise inflation expectations. Keeping base rates very low is one of the tools they have to try and stoke inflation.

When valuing companies, analysts attempt to value future income in today’s terms, by discounting future cash flows to take into account cost of capital (i.e. interest rates). Because interest rates are extremely low, this makes the future earnings of growth companies more valuable in today’s terms, thus creating a favourable environment for this type of company. Therefore, it would not be unreasonable to view the potential future performance of value stocks through the lens of the outlook for interest rates.

The economic shock created by the global pandemic should not be underestimated and the outlook is challenging. In addition, the US Federal Reserve has clearly signalled that interest rates are going to stay low for the foreseeable future through both its communications to the market and the revision of its policy framework in September. Closer to home, the Bank of England is keeping negative interest rates in the mind’s eye of banks and investors, although we don’t expect them to come to fruition.

Therefore, on a one to two year view, one might expect growth to resume its outperformance at some point. However, the last few weeks has clearly shown that value can bounce very aggressively at a moment’s notice. This will remain a distinct possibility until such time as the performance gap has been closed to a greater degree.

To reiterate my closing remarks from last time, this is not the time to take large bets in portfolios. Through times of uncertainty, the best thing to do is, often, nothing. Instead, we would encourage investors to rely on sensible portfolio construction and proper diversification. By holding both growth and value in portfolios, one is less likely to be whipsawed by market conditions such as these.