Quarter 3 has drawn to a close and we have been greeted by news of the first US presidential election debate between President Trump and Democratic nominee Joe Biden.

I must confess I did not get up at 2am on Wednesday morning to watch the debate, although I was tempted. Reports and clips unanimously point to an acrimonious and messy affair with neither party emerging the clear “winner”. Financial markets, however, are becoming more jittery around the election and potential outcomes.

For the moment, betting markets are putting their money on a Biden win: 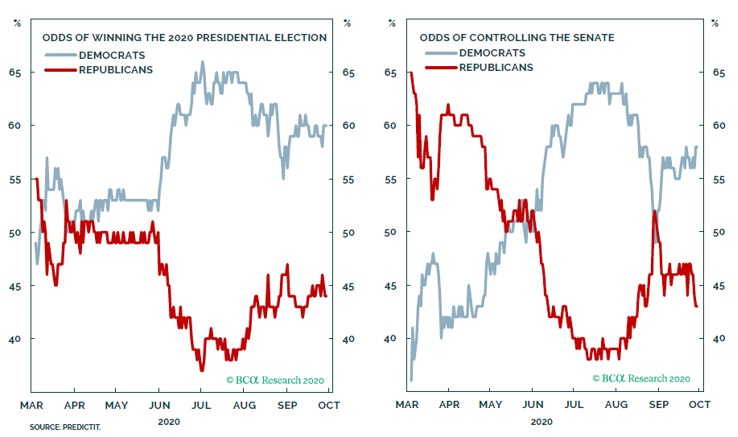 As readers will know, we do not advocate attempting to position for the outcome of binary events, such as this. However, no matter who wins - they will have an impact on financial market in both the short and long term.

Arguably the worst outcome, and what is making markets nervous, is Trump losing but refusing to accept the election results and hand over the keys to the White House. Both sides have been quick to dismiss the idea that there won’t be a “peaceful” transition should Trump lose. Trump has been ramping up rhetoric around fraudulent postal voting for which there is very little evidence, and his quick nomination for the Supreme Court, following the passing of Justice Ruth Bader Ginsburg, would appear to be manoeuvring for such an outcome.

Nominee Judge Amy Coney Barrett is widely seen as a staunch Republican with highly conservative views and beliefs. Her swift nomination has resulted in accusations of hypocrisy from Democrats, who have launched a legal case against her being confirmed into the Supreme Court.

Trump’s presidency has been controversial in many ways so we shouldn’t rule out his refusal to accept an adverse election result. This would create huge uncertainty and we would expect market volatility to pick up meaningfully in this scenario.

Volatility has remained at elevated levels over the 3rd quarter of the year, although well off its peak back in February and March: 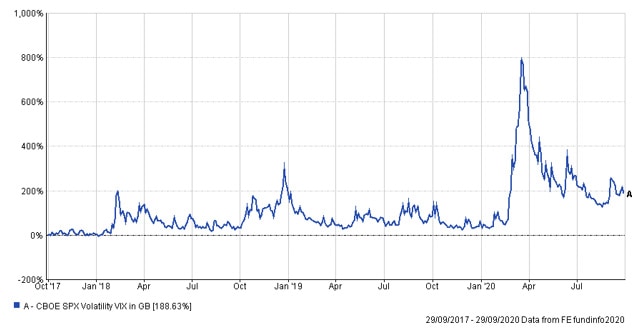 As I have written before, the risks facing the global economy and financial markets are numerous and varied so we expect volatility to remain high until we have greater clarity over the course of the ongoing pandemic, which probably means an effective vaccine. Reasonable estimates appear to be pointing toward the middle-to-end of the first half of next year for a vaccine which can be produced on scale and, should it come to fruition, this would be bring some much welcome calm to markets.

Most equity markets have made solid gains in Q3 although these were front-end loaded, followed by sideways movement with plenty of volatility: 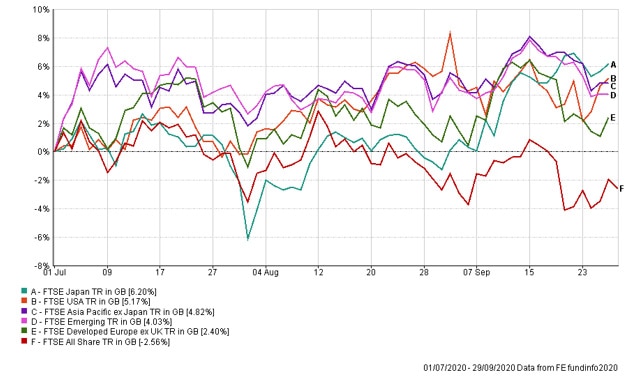 The UK continues to be laggard due to the constituents of the equity market and the make-up of our economy. We have, relative to other countries, a heavy bias towards service-based industries, finance and oil & gas, all of which have been hit hard by the lock down measures put in place to control the spread of Covid-19. That being said, the UK is a market which is trading on relatively attractive valuations, particularly in relation to the US. 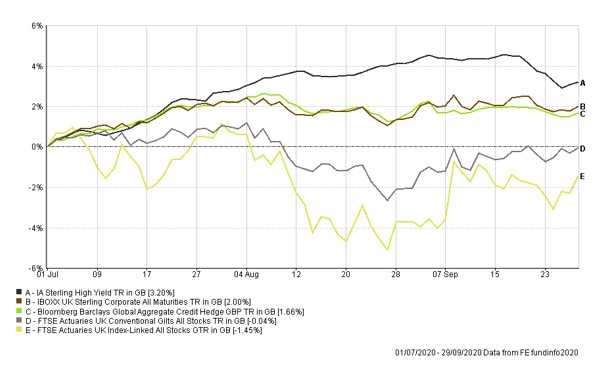 Whilst the outlook for bonds is highly uncertain, as I have discussed before, we urge investors to be mindful of their diversifying properties when held in a balanced portfolio.

The ongoing pandemic, central bank actions, politics and high valuations across most asset classes makes asset allocators’ jobs very difficult. Our view, as always, is that the best course of action is to stick to the knitting and rely on appropriate asset allocation techniques combined with expert due diligence. As eluded to last time, it is possible to make outsized returns from some securities, but one needs to be mindful of the underlying risks involved.

To put it bluntly, putting everything on black may win big, but a prudent spread of risk is a more sensible approach to investing in our view.