Last time, I sought to address a question that had been asked by our clients which was that of the movements of sterling. This time, I thought I would attempt to answer another question which is cropping up a lot and that is “what is the outlook for bonds?”

As regular readers will know, we are not in the business of trying to “call” markets, but I can hopefully shed some light on this complex conundrum. The first thing to highlight is that we do not expect investment returns to be as strong over the next 10 years as they have been for the past 10 years. This is for the simple fact that most asset classes, including equities and bonds, appear relatively expensive today. But, let’s look at our four main types of bonds in turn:

Government bonds are seen as the safest type of bond because developed market governments very rarely default on their debt obligations. Therefore, during times of markets stress, they tend to attract flows of money from investors seeking to protect their capital.

UK Gilts have performed very well of late and because the price of a bond is inversely related to the income yield it produces (i.e. as the yield goes down, the price goes up and vice versa) yields have come down dramatically. In fact, as the chart below shows, the two and five year UK Gilts are now trading on negative yields. This means that buyers are paying the UK Government for the pleasure of borrowing from them. 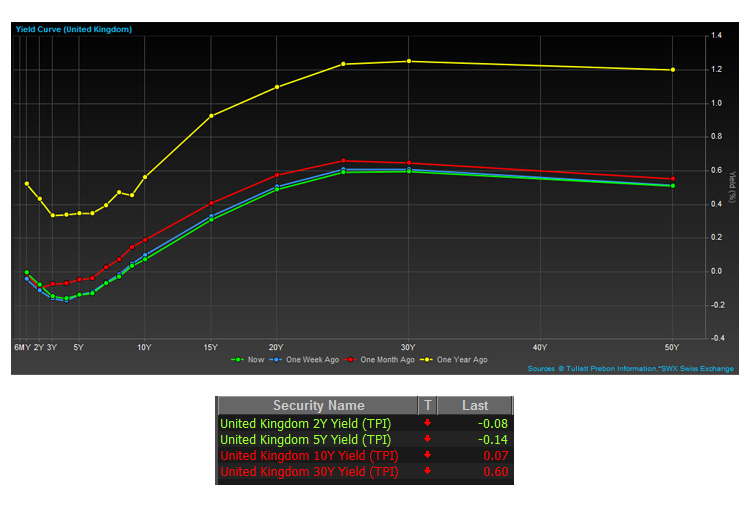 This is a strange dynamic but one that I think we may have to get used as Swiss and German government bonds have been trading on negative yields for some time now.

In the case of Germany, all government bond maturities trade in negative yield territory and investors pay 0.14% pa to lend to the German Government for 30 years. Clearly, UK Gilts could go the same way, but I think that is unlikely for a couple of reasons. The first is that the European Central Bank has been experimenting with negative interest rates for a few years now and, whilst it has been discussed, I think that there is a reticence to do the same in the UK. The other is that Germany has been running a current account surplus for a long time and is arguably more creditworthy than the UK. Therefore, whilst we could see further upside from Gilts we think it will be limited.

Having said that, Gilts are one of the only asset classes that move in the opposite direction to equities during times of markets stress (as demonstrated in March) and so they absolutely warrant their place in portfolios.

Whether the developed world will see meaningful inflation again is one of the great debates among investors. Our view is that the pandemic and self-imposed shutdown of economies around the world has undoubtedly created a deflationary shock. However, we expect this to be relatively short lived and for inflation to rise if we look out 24-36 months.

We think this because central banks have pumped massive amounts of cash into the financial system via both monetary and fiscal measures. As a reminder, the US Federal Reserve has expanded its balance sheet more in three months than it did through the entire financial crisis beginning in 2008. Should the global economy continue its gradual recovery, then we don’t believe that central banks will be in any hurry to raise rates from fear of bankrupting highly indebted elements of their economies.

Further, if we look at the US the "core" personal consumption expenditures (PCE), which measures prices excluding volatile food and energy, it has been below the 2% target for 74% of the past 20 years: 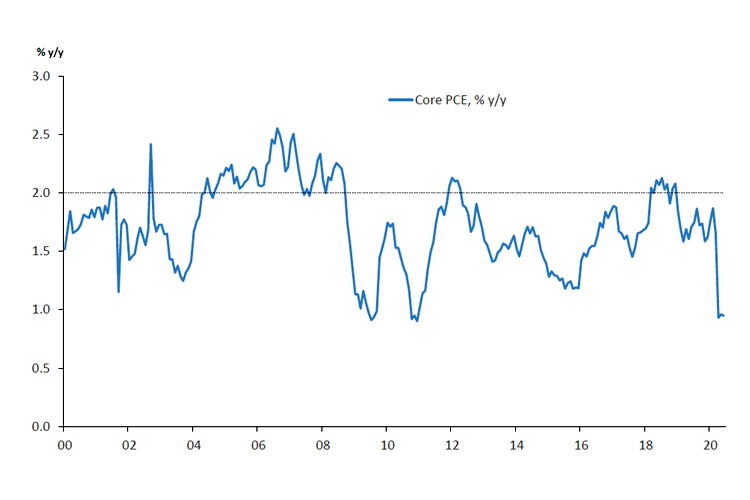 The wide miss of inflation targets is not unique to the US and this leads us to believe that central banks will also be willing to allow inflation to overshoot until the recovery is well established. Having said that, central banks have a delicate balancing act to pull off; allow inflation to run too high and consumers will reign in spending, stalling the economy versus inflation remain extremely low and government debt piles growing ever higher.

The continued easy monetary and fiscal policy should, in our opinion, be inflationary in the longer run. We believe that inflation risk is mispriced by markets and that inflation linked securities should form part of portfolios invested for the long term.

When investing in a corporate bond, one is essentially lending money to a company. Because companies are, often, less credit worthy than governments, investors demand additional interest (yield) to compensate them for the credit risk that they are assuming. The difference between the yield on a corporate bond and the equivalent maturity government bond is often referred to as the “spread”.

Whilst spreads have narrowed from their March wides, there are still opportunities for careful fund managers, in our opinion. However, care needs to be taken as corporate health is deteriorating due to the shutdown of economies around the world. The charts below show estimates of corporate health in the US and the number of corporate upgrades (more creditworthy) versus downgrades (less creditworthy) by the major US ratings agency, Moody’s:

Should the reopening of economies not continue successfully, there is a risk that a secondary solvency crisis emerges as companies struggle to pay their debts arises. Therefore, for portfolios that we manage, we are taking additional care to employ only those fund managers who have a proven track record of being able to manage risk and protect capital on the downside.

This is a wide-ranging asset class that could include various types of bonds from around the world. In the interest of time and risk of the onset of boredom, I won’t go through every possible permutation.

Instead I will just highlight that our preferred strategy is to employ fund managers of “strategic” bond funds. These funds have the flexibility to invest right across the bond spectrum and have many more “levers” to pull than more traditional funds. Again, we take special care to select fund managers who have a proven ability to manage risk and protect client capital.

So, in summary, the outlook for bonds is nuanced and complex. While we don’t envisage returns to be a strong as they have been for bonds, or equities, the firmly believe in their long-term diversification benefits as part of a well-managed portfolio.