Currency movements and particularly the outlook for sterling is a question being asked by our clients recently so, I thought we would take a (welcome?) break from discussing the pandemic to look at sterling and the effect of its movements on investment returns.

News flow throughout 2016, the latter half of 2018 and the first half of 2019 was dominated by Brexit as we approached deadline after deadline to finalise the “withdrawal agreement”. Understandably, however, Brexit has taken somewhat of a backseat in the minds of journalists and the public alike. Nonetheless, it remains a very real risk to UK assets and the economy.

The market’s perception of Brexit risk primarily played out in the relative value of sterling to both the euro and the US dollar. In the hours immediately following the Brexit referendum in 2016, the pound fell to levels not seen for over 20 years versus the dollar, as shown in the chart below. As we have discussed before, markets are forward looking in nature and the pound fell precipitously as markets attempted to price in the biggest change to UK trade and policy in a generation. There is a saying that markets hate uncertainty, and this certainly rang true four years ago:

In the years following the referendum, sterling has largely traded within a narrow range of around 1.21 to 1.34 versus the dollar. But the volatility has been extreme as markets continually attempted to digest and price in two general elections, numerous deadlines and both sides playing hard ball at the negotiating table.

Our clients are now beginning to ask us what the outlook is for the currency as the self-imposed December deadline for a trade deal approaches. Talks don’t appear to be getting anywhere and reports over the last few days suggest that ministers are working on the assumption that there will not be a deal. However, if the last few years have taught us anything, it is that we should expect obfuscation, posturing and drama when it comes to UK-EU negotiations. Bearing this in mind, increased currency volatility in the second half of the year would not be an unreasonable assumption.

But is the risk of “no deal” priced in? Well, it is impossible to say with any certainty. The following chart of sterling versus US dollar over the past 20 years would seem to suggest that a lot of the risk is priced in: 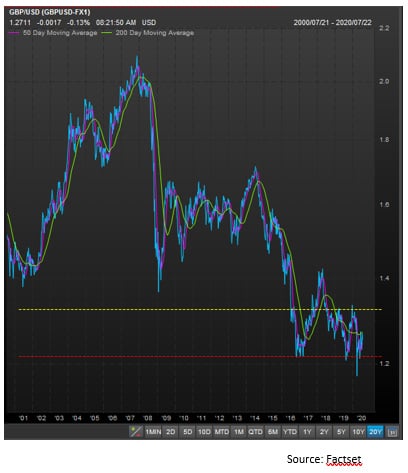 However, a “no deal” scenario would bring with it yet more uncertainty and further potential downside. Some analysts were, last year, expecting a fall to 1.08 USD, the lowest in over 30 years. On the flip side, any signs of a trade deal, of any sort, could mean a strengthening of the pound. As ever, the fickle machinations of markets are impossible to call in advance.

But what does this all mean for the potential return on investments? Let’s look at the behaviour of the FTSE 100 in 2016: 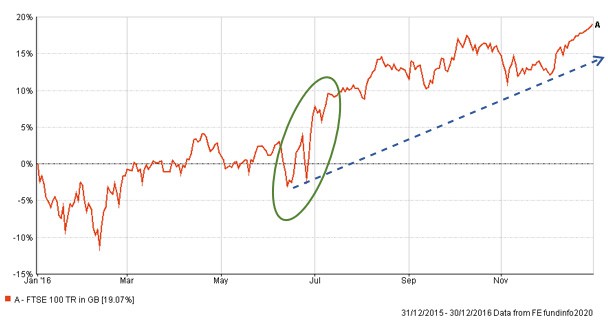 Despite initial volatility, the FTSE 100 rallied sharply following the referendum and continued to rise for the rest of the year. At first glance this wouldn’t seem to make much sense if the markets were uncertain of the future trading position with the EU. However, the FTSE 100 is dominated by companies who derive most of their earnings from overseas. In fact, around 70% of FTSE 100 earnings are from overseas. The dramatic fall in the value of sterling made these earnings immediately more valuable, thus driving up share prices.

If we now look at the relatively price action of the FTSE 250, where most of the earnings are from the UK, this effect becomes stark: 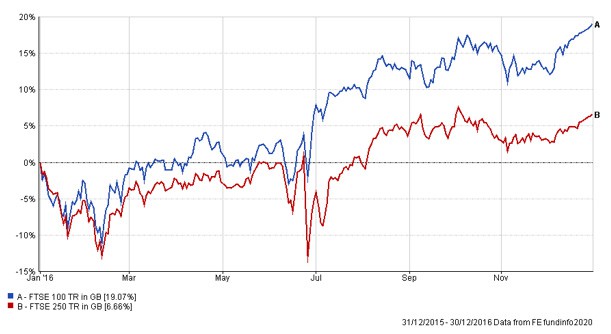 So, somewhat counterintuitively, a further weakening in sterling could provide a tailwind to returns for assets in companies which have overseas earnings, or which are invested overseas.

Should we avoid “no deal” we could see a somewhat stronger pound, resulting in a tailwind for companies who are more domestically orientated, but the opposite for larger or overseas companies.

We would caution against attempting to actively “hedge” currency risk within portfolios. A balanced portfolio of both UK and overseas assets, split across a diverse mix of companies, sectors and market capitalisations will provide a natural hedge to currency risk over the long term. Whilst sterling based investors have largely benefitted from sterling movements over the past five years, active hedging is a highly risky investment strategy that should only be attempted by investors with the highest of risk tolerances and the necessary expertise.