Many companies, including our own, are gradually reopening their offices for those who wish to go back. On Tuesday night, the Government announced that shops in the UK can re-open from the 15th June, providing that they do so safely and enforce social distancing measures. So, it is starting to feel like we are getting back to some resemblance of normality. This, for most, is great news.

The past weeks have witnessed racial equality protests around the World, which the markets have largely ignored. What they have not ignored, however, was last week’s extraordinary jobs report from the US. Every economist and investor we have spoken to expected the US unemployment rate to rise but the seemingly impossible happened. The US actually created jobs meaning the unemployment rate fell. This has been touted as the biggest positive economic surprise in history and markets rallied strongly into the end of the week as a result.

The gradual reopening of the global economy is good news for markets and the jobs data indicated that this is being managed more successfully than expected. Donald Trump referenced the alphabet soup of economic recovery profiles we have become accustomed to over recent months, stating “This is better than a V, this is a rocket ship”.

However, there is doubt over the accuracy of these jobs data given difficulty in collection and many Americans who were furloughed incorrectly stating that they were “employed but absent from work”, a category normally reserved for those on jury duty. This means that there is plenty of room for negative surprises in the future.

All this leaves investment strategist scratching their heads. Equity markets are seemingly out of touch with weak economic fundamentals and the question of whether we are in a new bull market, or indeed a longer secular bull market which started in April 2009, remain. Unfortunately, we do not have the answers. As ever, the arguments for and against are numerous and complex.

To highlight just one of the current debates, we have shown the enormous dislocation in the US equity markets between stocks with higher growth potential and those who are trading at a discount to their perceived long-term value. To demonstrate, we have shown the NASDAQ, a technology heavy index, and the Russell 1000 Value index, versus the broad Russell 1000: 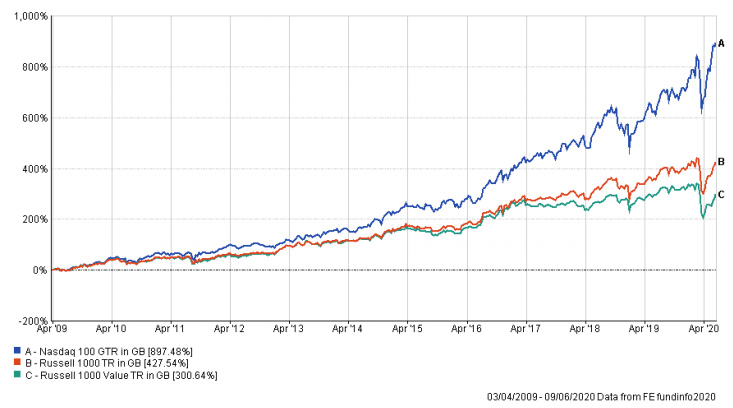 We can see that “growth” stocks and particularly technology stocks have delivered nearly double returns of the broader index since April 2009. Furthermore, “value” companies have underperformed the broad index by over 125%.

So, can this massive outperformance of technology and growth stocks continue, or will there be a mean reversion causing a spectacular rally in value? One side of the debate argues that growth stocks are overvalued, under threat from regulation as these companies become more entrenched in our daily lives (think Facebook, Google and Amazon) and that a period of relative underperformance is long overdue.

The other side argues that we are in the early stages of a great technological revolution during which technology has become an essential part of our lives and business models. Technology has improved efficiency, lowered costs and, with the advent of artificial intelligence and quantum computing, a sea change in our daily lives taking place. Therefore, they say, the true value of these companies is far from being realised.

As regular readers will know, we are firm believers in asset class diversification and take care to distance our thinking from these debates. The above is just one of the many dislocations and tensions in financial markets and the outcomes are inherently unknowable. Disciplined investors should not attempt to “call” a trend or time markets in the hope of outsized returns. Instead, prudence dictates that investors base decisions on what they know. Knowable truths are: