Despite a short burst of respite with central banks promise of monetary action, last week saw things worsen as the virus spread further across the globe, with most of Northern Italy now in lockdown and many commentators fearing the US will be next.

To add insult to injury came this weekend’s oil price shock - following Saudi Arabia’s decision to slash export prices and boost their own oil production, heading them into competition with competitors, Russia and the US.

Thus, we have seen panic selling and chaos reign in the markets with many European markets heading into or already in Bear market territory, causing the VIX Cboe Volatility index (commonly referred to as ‘the Fear Gauge’) to surge to its highest level since December 2008.

Behind all this was the underlying expectation that growth in 2020 was to pick up from the lows seen at the end of last year, with signs of regional growth already showing in the earlier part of this year.

As long-term investors, it is important to remain calm and to take a balanced view, looking beyond short-term market volatility.

Whilst the peak of the virus is becoming harder and harder to predict, it is expected to peak. We can compare with previous outbreaks; however no two viruses are the same and the economies of the world have now changed, with China now responsible for 1/3 of global growth and supply chains more connected the world over. On the other hand, medical science has improved dramatically over the years, and we live in a far more flexible world in terms of technology and working environments – suggesting improved capability to combat the virus and limit further spread.

Then, looking further ahead, governments are expected to initiate supportive fiscal policies. This should help support economic growth and, combined with accommodative central bank monetary policies, ensure that any slowdown is only temporary.

Eventually, therefore, it is expected that global growth will benefit from the subsequent recovery as normality resumes, which will support the recovery in business earnings, in turn helping to underpin market valuations.

As Peter Dalglish one of our Investment Committee Members so eloquently put it “Given the theory that the return on your investment is primarily a function of the value you pay, the lower valuations presented following the recent market weakness should be welcomed as a potential opportunity, not feared.” 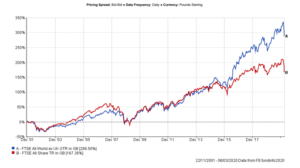 Finally, as the below shows – equity markets have historically always ‘weathered the storm’ with growth over the longer term for the most part in one upwards direction.